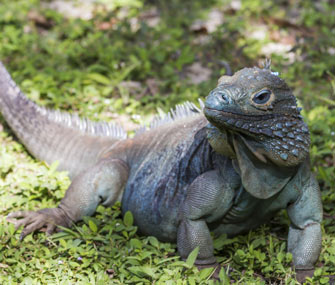 Thinkstock
Thanks to conservation efforts, the Grand Cayman blue iguana has been downgraded from critically endangered to endangered.

Lizards can be found on every continent except Antarctica and can live in almost any habitat. There are more than 4,000 lizard species around the world, ranging from chameleons to geckos. Certain species of iguanas top the list of the most endangered lizards, threatened by habitat loss, invasive species and harvesting by humans.

August 14 marks World Lizard Day. To help you celebrate, here is a closer look at the iguanas that need our help and what you can do to make a difference for the threatened lizards.

Tommy Owens, a keeper at the San Diego Zoo, says that the most endangered lizards are West Indian rock iguanas. Rock iguanas are foundf in the Caribbean; human settlement is responsible for lowering their numbers. The following are three of the more endangered rock iguanas.

Jamaican Iguana: The Jamaican iguana is currently listed as critically endangered on the International Union for Conservation of Nature and Natural Resources (IUCN) red list of threatened species. It is found in the tropical forests of Jamaica's Hellshire Hills and was thought to be extinct in the 1940s before being rediscovered in 1990. Deforestation and invasive species like mongooses and pigs threaten the population. Fortunately, the San Diego Zoo successfully bred the iguana in captivity for the first time last year.

Anegada Iguana: Found only on Anegada in the British Virgin Islands, this iguana is also critically endangered. It used to inhabit some of Puerto Rico’s islands but now has a restricted range. Major threats to the species include feral predators and competition for food from livestock. The combined efforts of and partnership among the San Diego Zoo Institute for Conservation Research, the British Virgin Islands National Parks Trust and the Fort Worth Zoo have led to the raising and release of 179 Anegada iguanas to date, helping boost the wild population.

Grand Cayman Blue Iguana:Thanks to conservation efforts, this species, which is endemic to Grand Cayman Island,has been downgraded from critically endangered to endangered on the IUCN red list. In 2002, there were fewer than 25 of these iguanas in the wild. In 2012, that number had risen to close to 750. Like the Jamaican iguana, loss of habitat threatens this species as it’s encroached upon by agriculture and tourism. Invasive species such as cats and dogs also threaten the population.