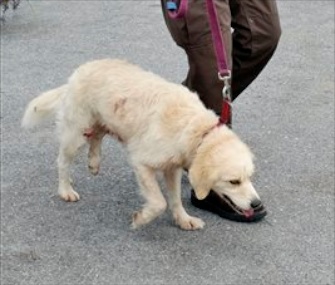 AP
Henry walks with a sheriff after helping his owner fend off a black bear.

Henry, a Labrador Retriever mix, is being hailed as a hero for helping his owner battle an attacking black bear at George Washington National Forest in West Virginia.

According to a police report, Steven Krichbaum, 59, was walking with Henry in a wooded area of the forest Thursday when the pair came upon a black bear and two cubs.

“The black bear, in response to Krichbaum and his dog’s presence, responded by attacking them,” the report said. Krichbaum later credited Henry with saving his life by fighting the bear while he kept hitting it with a rock, reported Virginia’s NVDaily.com.

The man and his dog were injured in the clash, but Krichbaum was able to drive his Subaru to a fruit stand in Middletown, Virginia, where they got help from the stand owner's wife and friend, as well as from rescue crews, before being transported elsewhere for further treatment.

Witness Cathy Patterson said Krichbaum suffered from “claw marks and gashes” and was taken to Winchester Medical Center after being treated at the fruit stand.

Henry had several wounds, too. The worst was on one of his hind legs. He was taken to a local emergency animal hospital for treatment and is expected to recover.