Home ›
Our Pet Experts ›
Laura Cross ›
Hi-Yo, Silver! What It Takes to Be a Horse in Disney's 'The Lone Ranger'

Hi-Yo, Silver! What It Takes to Be a Horse in Disney's 'The Lone Ranger' 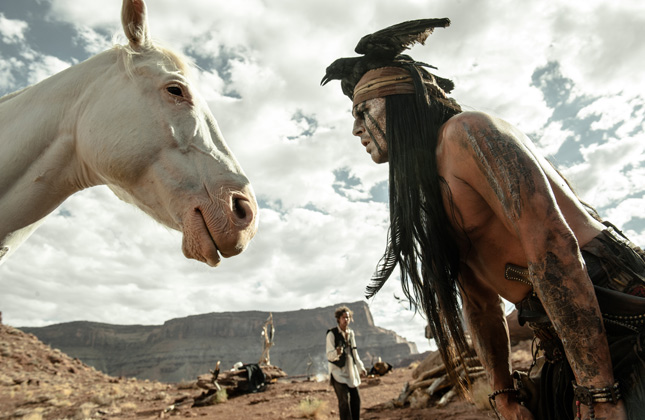 Leaping onto a moving train, fleeing from a burning building, galloping through the desert with a handsome and mysterious masked man on his back — those are just a few of the tricks Silver, the Lone Ranger’s trusty white steed, performs in Disney’s new adaptation of The Lone Ranger.

To the average filmgoer, teaching a horse to perform any of these feats might seem incredibly daunting, but stunt and trick sequences are not as hard as they sound. The real challenge, according to Lone Ranger head horse trainer Bobby Lovgren, is far less expected and not quite as exciting: getting the horses to stay still.

“It's really the standing there doing the dialog and not moving, when the horse isn’t doing anything — those are very difficult because it takes a lot of patience from the horse,” Lovgren told Vetstreet. “It’s like having a little kid stand in the corner; it's very difficult.”

Surprised? To find out more about how the horses were trained for Disney's reboot of the iconic Western, Vetstreet went directly to the expert. Lovgren, a horse trainer from South Africa, has been training horses in movies such as Seabiscuit and War Horse for more than 20 years. He dished on the difficulties of finding white thoroughbreds to play Silver and gave us the inside scoop on actors Johnny Depp and Armie Hammer's equestrian skills.

Q: How did you choose the horses for The Lone Ranger?

A: Bobby Lovgren: This is a real different film because it’s with white horses. Before a lot of films we try to find horses with a lot of experience with particular athletic abilities, which makes it much easier to train, but with The Lone Ranger we had to go out and get the color first.

Q: Can you tell if a horse is going to do well on camera?

A: You really don’t know until you’re in that situation. We definitely try to find out a lot about the horses during our preproduction and try to simulate all situations of filming and things like that. But you know, it’s a little different once you go in; you’re under a little bit of pressure and you find out a lot more about them. That’s why we never do a film with only one horse.

Q: How many horses play Silver? Was there a breakout star?