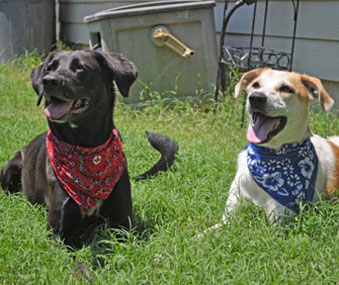 I've always prided myself on keeping my dogs, Rudi and Hollie, fit. I take them for walks and runs and monitor what they eat. So you can imagine how surprised I was to learn a few months ago at their semiannual checkup that they'd both put on a few pounds since their last appointment. I mean, I had noticed they were a little less lean, but was shocked to see just how much.

We'd changed foods and I hadn't realized that the serving sizes were considerably different than their old food, so that was an easy thing to fix. Still, I wanted to make sure I was getting them back down to their normal weights (60 for Rudi, 37 for Hollie) just as quickly as possible, especially for Hollie who has hip issues that make extra weight an even more critical problem.

Fortunately, right around this same time, I met some folks from Tagg The Pet Tracker, who explained how the Tagg GPS tracker had a new functionality that could help me make sure my dogs were getting enough activity each day. I received two units for review (one for each dog), and began monitoring their activity.

Here's the scoop: Tagg has become well-known for its GPS tracking. You place a small device on your dog's collar, and if she leaves the designated area, you receive a notification and can track where exactly your pup has gone. It's a great feature for escape artists, but that's not really a problem with my pets (knock on wood).

The activity tracking function is fairly new and definitely a helpful feature for anyone trying to gauge how active their pet is on a daily basis. It uses the same small device on the dog's collar and sorts her activity into four categories: resting, lightly active, moderately active and highly active.

The dog earns points for activity, and the device tracks when said activity takes place. So, if you're gone all day, you can see that your dog paces for 20 minutes when you leave, sleeps for three hours, goes nuts for a few minutes when the UPS guy stops by, walks around for another half hour, then sleeps off and on until you get home and take her for a walk. Then, as you try different activities (morning walks, food puzzles, trips to the park), you can see how those activities affect your dog's daily points. Owners can view the points on Tagg's website or by using the smartphone app.

How the Tagg Tracker Works 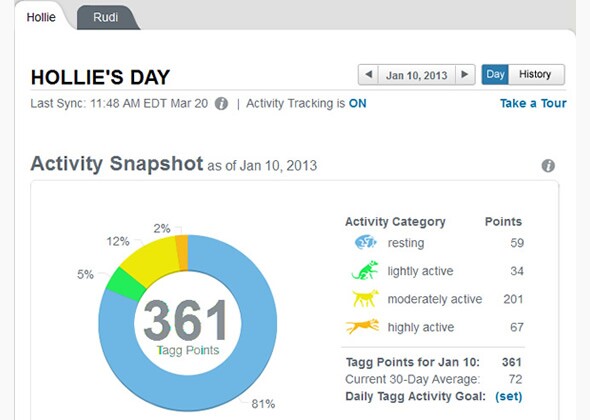 The Tagg website gives several easy-to-read ways to see how active (or inactive) your dog is. 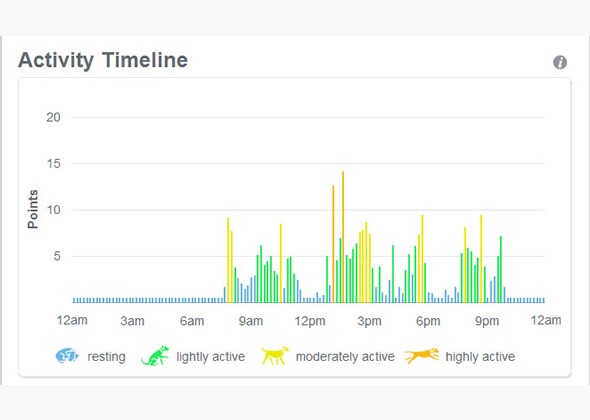 In addition to viewing how active your pet was during the day, you can also determine which hours his activity took place. 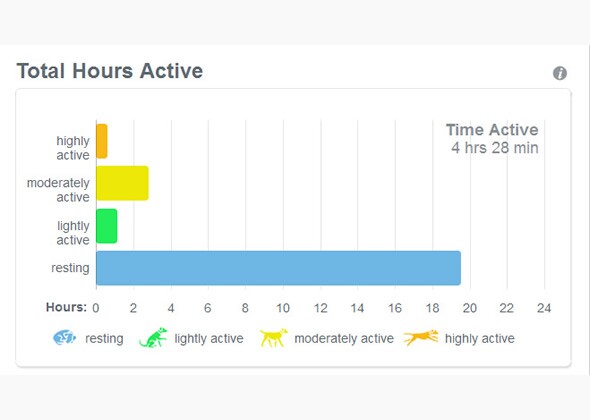 Want to know exactly how long your dog was active each day? That's covered too.

While it's really designed to compare pets' day-to-day activity and help owners identify changes or trends in their pets' activity (which may lead to a discussion with their vet or a change in their exercise routine), Tagg does have some average daily point ranges: Higher energy dogs who get regular, vigorous exercise averaged between 350 and 550 daily points, medium energy dogs who got moderate exercise were between 225 and 350 points, and lower energy pups generally earned between 125 and 225 points each day.