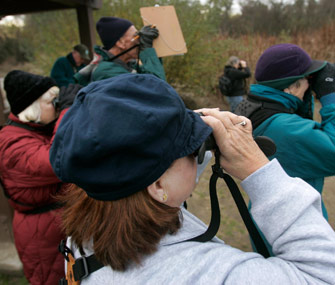 Alamy
Birders participate in the 2010 Christmas Bird Count with the Palomar Audubon Society in Escondido, Calif.

Ever wanted to give birding a try? Looking for a break from the holiday rush? Join the 2013 Christmas Bird Count and you can do both! You'll also be contributing to a project that started doing citizen science a century before that term became common. The 114th annual count takes place this year from Dec. 14 to Jan. 5. Groups of volunteers will count birds in predefined areas. The Audubon Society website has location and sign-up information for groups across the country. There's no charge to participate, and no experience is necessary — coordinators make sure beginners are in a group with seasoned observers.

The Christmas Bird Count started back when Americans were just beginning to think about wildlife conservation. The first count took place on Dec. 25, 1900, when an early leader of the Audubon Society proposed an alternative to the traditional Christmas "Side Hunt," where hunters would "choose sides and go afield with their guns; whoever brought in the biggest pile of feathered (and furred) quarry won."

The Side Hunt "was a holiday tradition that kind of epitomized the overharvesting of wildlife," says Geoff LeBaron, Christmas Bird Count director at the Audubon Society. The CBC, he adds, "started as an event to raise awareness that there needed to be conservation of wildlife and not just consumption."

That first year, 27 birders counted birds in 25 locations across North America. Last year, for the 113th count, there were 2,369 count locations: 1,849 in the United States, 417 in Canada and 103 in Latin America, the Caribbean and the Pacific Islands. A record 71,531 bird watchers, or "observers," participated in the count, breaking the previous year's record of 63,227.

This might not be the most comfortable season in which to go outside and count birds, but keeping to the long-standing tradition means that researchers can make comparisons going back many years. "It's the same people doing it at the same time of year in the same places in the same way every year," LeBaron says. "You get consistency in the way the data in each count are collected, and then you look at that data over time and you get trend data."

The data collected in the Christmas Bird Count has had real conservation impact. The first case, LeBaron says, was probably the American black duck. Hunters had noticed that the species seemed to be declining and reported this to officials at the Fish and Wildlife Service, who then looked at the Christmas Bird Count data. "They were able to see that black ducks had declined dramatically," he says. In response, the number of ducks allowed to be hunted was lowered.

These days, the Christmas Bird Count data has become a regular part of how the federal government assesses the status of birds. One advantage of using this kind of broad, long-term information is that it allows researchers to see whether populations are declining before a species is almost gone. It also lets them see changes in where species are found — and there have been a lot of them.

The reason behind the woodpecker's move to New England is still a mystery. But the Christmas Bird Count has found range shifts that can be associated with other known changes: The Audubon Society's report on birds and climate change, which drew on data from the Christmas Bird Count, noted that 60 percent of 305 species had shifted northward by an average of 35 percent. These changes correlate with warmer temperatures in the early winter, LeBaron says, which makes sense because snow cover is retreating northward and wetlands aren't freezing up as far south.

You might wonder how you can help count different varieties of birds if you can't tell a flicker from a finch, but as LeBaron explains, identifying the individual birds is only one part of the observer's job. "You can still either see or hear birds," he says. "You don't need to know what something is to see it first, or to see that it's there when someone else is looking at something else."

Which means that even if all you can do is say, "Hey, look at that!" your experienced companions will be able to identify a bird they might have missed without your help. And LeBaron says there are actually advantages to having newbies along: "I love taking out beginning birders because there's this incredible thing that just seems to happen regularly called beginner's luck."

He tells the story of an acquaintance who took his granddaughter on her first birding outing because she wanted to see one of the most ordinary birds possible — a robin. They went out to a spot where he knew robins were congregating.

"He's trying to find her the best robin that's sitting out there in the open, and she says, 'Grandpa, what's this thing?'"

It was a European thrush called a redwing — a bird rarely seen in North America. In fact, this was the first time it had ever been seen in Pennsylvania. "And it was the first bird this girl ever saw on her own," he says. "That's the kind of thing that can happen."

LeBaron says that while such sightings may be attributed to luck, there's more to it than just good fortune: Sometimes fresh eyes will see a place differently.

"As experienced birders, we know our patch, and we tend to look where we've found things before, so we don't necessarily look in every other little corner of the places that we're walking through," he says. "The new people are like sponges. They're looking for everything."

For more information about the Christmas Bird Count, or to find a group in your area, visit the Audubon Society website.