Home ›
Our Pet Experts ›
Laura Cross ›
Holiday Trivia: What It Takes to Get a Presidential Turkey Pardon

Holiday Trivia: What It Takes to Get a Presidential Turkey Pardon 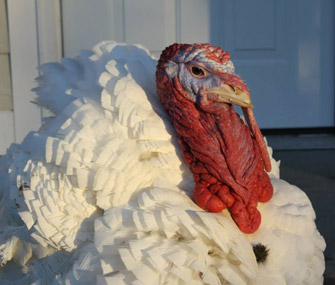 Not just any turkey will have the opportunity to stay in a posh D.C. hotel, garner lots of media attention and be "pardoned" by the president today. To end up at the White House (and not on a plate), the lucky turkey and his alternate had to beat out more than 60 eligible fowl contenders.

The search for the perfect presidential turkeys began last July when a flock of 60 to 80 of turkey farmer John Burkel’s poults hatched on his farm in Badger, Minn.

Burkel is the current chairman of the National Turkey Federation, which has presented a turkey to the president every year since 1947, when Truman was in office. As this year’s chairman, Burkel will have the honor of presenting the National Thanksgiving Turkey to President Obama.

As you can imagine, training more than 60 poults at once is not easy, so in August, Burkel, his wife and five children culled the contenders down to 20. They moved the poults from one of their big turkey barns (which are as big as a football field) to a special garden shed in their backyard. That’s when preparation for the annual White House ceremony really began. 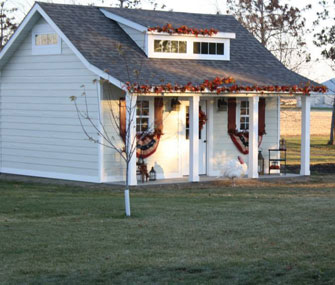 National Thanksgiving Turkeys must be able to handle noise, camera flashes and the possibility of meeting two very important Portuguese Water Dogs. To prepare the poults for all the extra attention and stimuli, Burkel and his family took lots of photos, created lots of background noise in their shed and occasionally brought in the family dog to really stir things up.

“They listened to anything from Vivaldi to John Mayer,” Burkel says with a laugh.

Burkel even tried to train his flock to gobble on command. Which, he laments, didn’t go so well.

Alas, all 20 toms couldn’t meet the president, so the Burkel family winnowed the contenders down to six. “The six picked themselves,” Burkel says. “Once they were cut down to 20, you could see the ones that would let you pick them up without effort and were socialized the most.”

When we spoke with Burkel earlier this month, he was still trying to choose his top two toms, but he was pretty certain he knew who they would be.

“The one who is the most socialized also happens to be the one with the brightest color and most character. The others haven’t matured quite as fast.”