“We let Boomer search and he ends up getting into this walk-in attic. We all looked in there and it appears to be totally empty. There’s nothing in there. All of the sudden Boomer is just ripping into the insulation. I’m looking at him wondering what he’s doing. In the law enforcement canine community there is an old adage that says you should always trust your dog. As a new handler, I didn’t fully grasp that concept just yet,” Perryman says. 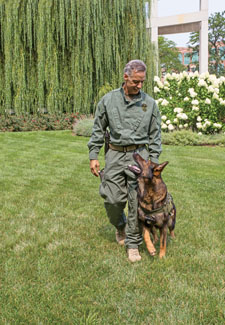 “And then I hear the suspect, who had cut a slit between the insulation and drywall where he secreted himself, start screaming. Boomer had him. This guy was a very skinny guy. So if you looked in there, you didn’t even see the bump in the insulation, but Boomer knew he was there.”

Boomer’s find was a great circumstance, because once the SRT departs the house, a group of agents are assigned to come in and search the premises. If Boomer hadn’t found this known violent criminal, there very likely would have been a serious confrontation between the suspect and the follow-up agents once they started the search for evidence. Boomer potentially saved their lives, as well as, ironically, the suspect’s life. “Luckily Boomer was there and we found him. That was the first time executives in Washington, D.C., started hearing about what he could do,” Perryman says.

The second big break for the ATF SRT canine program occurred a few months later in Pensacola, Florida. The ATF was working with Customs, DEA, and local law enforcement to hit a large compound where illegal methamphetamines were being produced. It was a massive operation spread across several acres of land, which included a barn, a house, and about 40 junked cars.

The agents and officers converged on the property and took five people into custody. Once the property was secure, one of the forward observers, or snipers, notified the SRT Team Leader, Special Agent Don Brougher, that he had observed an individual in a dark sweatshirt fleeing one of the buildings, and that this individual was not currently in custody. So Perryman requested through Special Agent Brougher to take Boomer around the property to see if the canine would catch the scent of anyone who might have left the property.