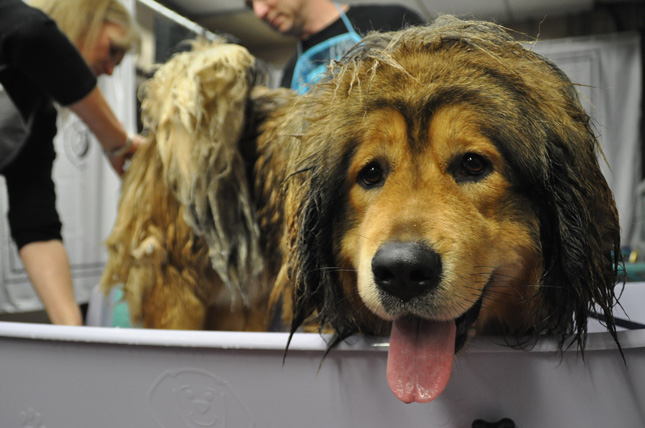 Shayna Meliker, Vetstreet
Gaga the Tibetan Mastiff gets a bath in the Hotel Pennsylvania's doggie spa. (And yes, she is named for Lady Gaga.)

New York City. Population: 8 million. Ever wonder what happens when you throw in another 2,721 dogs? We did. So we took a trip to the Hotel Pennsylvania, long regarded as the consummate hotel for canine contenders at the Westminster Dog Show. It opened its doors 94 years ago, directly across from the show's hallmark institution, Madison Square Garden.

We got a chance to tour the hotel with Jerry Grymek, the "Doggie Concierge" of Westminster — and he told us some great stories that we wanted to share with you.

That Time When the Hotel Hired An Opera Singer

Of all the wild requests the Doggie Concierge has gotten over the years, this is our favorite: Last year at Westminster, the team behind a Spinone Italiano requested an opera singer. For what?

Turns out that Ecco (Ch. Sweetbriar's Ecco D'Oro JH, to be exact) likes to be serenaded before he goes into the ring. So, naturally, an opera singer waited in the lobby to send Ecco on his way.

That Time When Superstitions Took Over

Remember in Best in Show, when Beatrice the Weimeranier couldn't compete without her Busy Bee toy? OK, this isn't quite like that, but owners here definitely have their rituals and good luck charms.People call the Hotel Pennsylvania months in advance to book a certain lucky room — this year's is Room 212. Can you figure out why? The date for the second night of the competition (and Best in Show) is Feb. 12. So, Room 212.