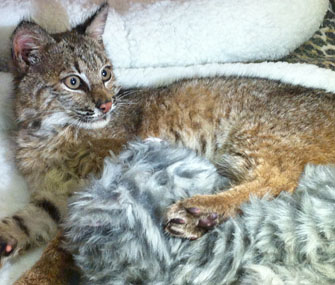 You might recall the exciting (and emotional) release of two bobcat kittens rehabilitated at Big Cat Rescue (BCR) earlier this year. And, if you're anything like us, you ended up with some questions. How do they decide which animals to release and which animals to keep in the sanctuary? How do they know when they're ready to go? BCR, an accredited, nonprofit sanctuary nestled into 55 deeply wooded acres near Tampa, Fla., is the world's largest sanctuary and rescue facility dedicated completely to abused and abandoned big cats; currently, over 100 lions, tigers, cougars, bobcats and other species of big cats call it home. Its mission is providing cats in their care the best possible home and helping end abuse and avoid extinction by educating the public about the plight these magnificent animals face, both in the wild and in captivity.

BCR is also assiduously involved in rescuing and rehabilitating bobcats, which are nurtured and carefully prepared for successful release back into the wild whenever possible. But how do they know which animals are ready for release? To learn this and more, we turned to Carole Baskin, founder and CEO of BCR.

Q. How do you determine whether or not to rehabilitate and release an animal like BCR recently did with the bobcats, Copter and Gator?

A. That depends on how they come there. If the animals were pets, they cannot ever be released back to the wild. The only animals we can release back into the wild are cats who were born in the wild. Some of the easiest bobcats for us to rehabilitate and release are the cats who have been injured by a car strike, a hunter or mauled by dogs. Since they were raised by their mothers, they already know how to hunt and stay away from people.

The harder ones are the orphaned kittens. If a mother bobcat is killed and her kittens are left behind, we always try to raise these kittens in a way that we can release them back into the wild.

Q. If the animals cannot be released, does BCR keep them indefinitely?

A. Once we are confident that a rescued bobcat has been successfully rehabbed and able to take care of itself in the wild, it’s ready for release back into the wild. That’s our happiest day! But if a cat has been so severely injured that it’s unable to hunt and feed on live prey, the cat is fed a special diet of soft food, so [it] cannot be released. Once we obtain clearance from the Florida Wildlife Commission to do so, we will give these cats a permanent loving home. But it’s really very sad when a cat comes from the wild and needs to be caged for the rest of its life.