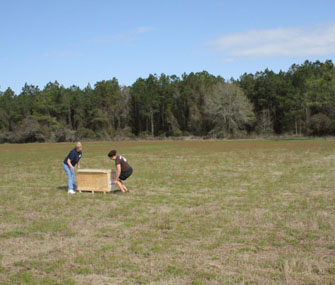 Photo by Big Cat Rescue
The staff preparing to release a bobcat.

Q. Do you teach the cats how to hunt and other survival tactics? How do you monitor them to make sure they're able to take care of themselves in the wild?

A. We keep the cats as wild as humanly possible, but it can be difficult if they have had a long recovery from severe injuries and spent extensive time in our cat hospital.

Since they behave differently when humans are around, we watch them with cameras. When they are released into their outdoors enclosure, we use closed-circuit TVs to monitor their progress. [This keeps] contact with humans at an absolute minimum, which is crucial to a successful release.

With these cameras we can observe if the cat is catching [its] own food. We have a tunnel system of long PVC pipes going into the cage in different places. We put rats into the tubes far away from the cat so it doesn’t know when food is coming. The rats may come down the tubes right away or take all day and land in different places, so the cat has to learn how to be on the lookout for food all the time to quickly capture and kill their food, just like they would in the wild. When we see that they are able to do so, they are then ready for release.

The one exception is the kittens who may take a little longer to be released. We need to be sure they are big enough to fend for themselves, in case there are other big cats in the area that may come after them.

Q. Is releasing the bobcats difficult emotionally? Do you worry about their chances for survival?

A. It's very difficult to feel that the animal is really ready to go back to the wild, especially after we have nurtured an animal through such a precarious time. And as much as we want to put them back as quickly as possible where they belong into the wild, it’s scary. It's like sending your first-grader off to school for the first time. And as you open the door to let them go, you worry about them staying away from traffic, coyotes and humans.

Q. Is it easier to rehab and release younger bobcats or older ones?

A. Since older bobcats already have all their survival skills, they are far easier to release. It’s the baby bobcats that worry us the most. They have so much to learn without bonding with humans. It’s difficult to teach them some of the skills their mothers would have taught them, such as hiding from humans, how to catch their food, and how to behave around other bobcats.

Our first choice is raising a bobcat kitten with another bobcat kitten. If there’s an opportunity to raise a bobcat kitten with tested feral cat mother and their kittens that’s our second choice. We sometimes put a baby bobcat into a carrier and take the kitten to areas where we have caged bobcats, to learn about bobcat language and body language by observing them. However, they cannot have personal interaction with them because the bigger bobcats would kill them.

Although bobcat kittens are cute and cuddly, these cats are powerful and dangerous when they mature. They belong in the wild and should never be kept as pets.