Home ›
Our Pet Experts ›
Mikkel Becker ›
How Do I Keep My Dog From Barking When He's in the Car?

How Do I Keep My Dog From Barking When He's in the Car? 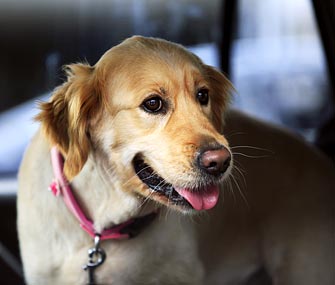 Q: My dog embarrasses me by barking at other people and dogs while in the car. How do I stop him from doing this?

A: Many pet owners avoid eye contact and talk in hushed tones when they confess to me that their dog lets out shrill yaps in the car. Take heart: It’s a common problem that can stem from different emotions, including fear, frustration and sometimes just plain fun.

For dogs, the scenario is simple: I bark, then the other dog or person leaves. The barking makes them go away, so I’m going to do it again in the future. Although the barking doesn't actually make the person or dog leave, many canines connect the events and repeat the annoying behavior.

Practically speaking, conducting a training session while driving isn’t realistic — and certainly isn't safe — and it’s also a challenge to address barking when a dog is left unattended in a car. So the best option is to use a containment system, which better controls a dog who's left alone in an automobile.

From a safety standpoint, a dog should be restrained in the backseat to reduce driver distraction and safeguard the dog in the event of an accident. You can buy restraint systems that come with harnesses, which fasten to seat belts and reduce the range a dog can roam in the car. Or you can opt for my favorite equipment: a crate.

You can use soft-sided or hard-sided crates, which should be strapped down. The crate allows only limited vision outside the car, cutting down on barking. To further soothe your dog, give him a stuffed Kong or another tempting chew toy to focus on, or use a pheromone spray in the crate, which has a relaxing effect.

A lot of owners feel guilty about putting their dogs in car restraints because they think it takes away their joy, but you're not doing the dog a favor by giving him free run of the car. By using a restraint, you have the best chance of protecting your pet during a crash — along with keeping him from fleeing the scene of an accident.