Kayla Pickrell, a stationery designer in Lexington, Ky. was also scared of dogs. Her fear stemmed from being bitten by a neighborhood dog when she was young. “My entire life, I was terrified of dogs. It didn’t matter the size, age, breed, etc., I was just terrified.” 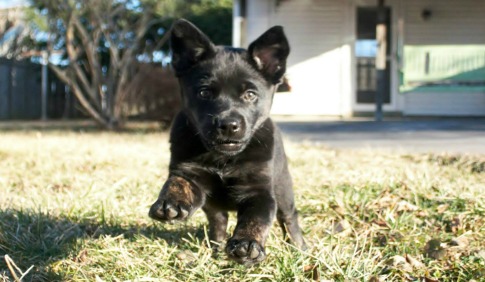 Photo credit:  Kayla Pickrell
Odin melted his owner's heart.
But when Pickrell was 20, her boyfriend introduced her to his Great Dane puppy. While she was still scared, she discovered that has the puppy grew, he followed her lead; he knew her habits and her rules. “But, (he) still wanted to be friends with me. I grew to love the dog and got my own puppy one year later.”

Pickrell’s dog Odin cemented her love for dogs. “Not only do I love him, but every dog,” she says. “I’m that weird person at the dog park who will literally play and cuddle with every dog.” Pickrell says her family is still shocked at the change in her behavior and finds it hard to believe she has a dog of her own now.

But, Pickrell now knows the love between a dog and a person is indescribable. “Truly, it is hard to put into words the love that I have for both my dog and others,” she says.

While bad experiences with dogs, or even a lack of experience with dogs, can make someone wary or disinterested in the canine kind, dog lovers know that all it takes is one special dog to change one’s life forever.