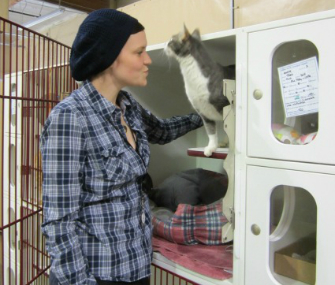 Walk into the San Diego Humane Society Shelter in Oceanside, Calif., and you won't hear a single bark. That's because the building houses only cats, rabbits and other small animals. The dog shelter is about a mile away.

On the other side of the country, at the Animal Rescue League of Boston, cats get to lounge and play in the lobby one day a week in the morning before the shelter opens.

These are just two examples of shelters that are taking steps to improve the overall health of cats by using tactics that don't require a lot of time, money or space.

"It's time to break out of old habits that don't work and become creative and innovative, so we can improve life for cats in shelters," says Dr. Martha Smith-Blackmore, DVM, director of medical services for the ARL of Boston and a former president of the Association of Shelter Veterinarians.

"Poor cat housing is one of the greatest shortcomings observed in shelters," adds Dr. Smith-Blackmore, who served on a 14-member panel that issued new guidelines for shelter care. "The constant stress of barking dogs, crammed conditions and the inability to socialize and play can lead to suppression of the immune system and greater risk for upper respiratory diseases, ringworm, gastrointestinal upset and more in cats."

But, says Dr. Smith-Blackmore, "it doesn't have to be this way." In fact, here are six smart solutions that some shelters have implemented to boost adoptions — and enrich the lives of felines waiting for new homes. 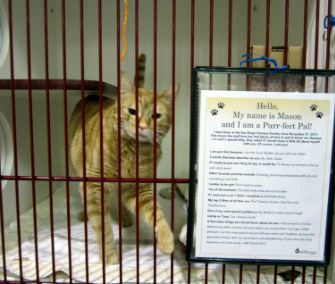 Some shelters purposefully feature two very different types of cats in lobby displays by putting a kitten or a popular breed, like a Siamese, in one adoption showcase, and a shy cat, a black feline, an overweight cat or some other feline who's been at the shelter for a long time in the other.

"Since we implemented this dual tracking system at the Animal Rescue League of Boston, we've reduced the average stay for all cats at our shelter from six weeks to three weeks," Dr. Smith-Blackmore says. "It works when you give people a choice of two contrasting cats."

For better feline well-being, Dr. Smith-Blackmore commends shelters that forgo small, stainless steel cages in favor of roomy cat condos that feature additional vertical space, portal holes, shelves and wheels. Cats, she says, like having options when it comes to sleep spots — whether it's an elevated bed or a towel that they can hide under. Kitties also need ample room to stretch, arch their backs and lie down without bumping into a litterbox or a food bowl.

Rooms With a View

Since cats thrive on stimulation, some shelters are installing flat-screen TVs that play nature videos and fake fish aquarium mobiles that move, so caged felines have something to catch their attention — instead of staring at a blank wall. 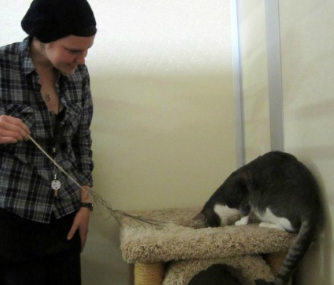 "A majority of cats thrive on human contact," Dr. Smith-Blackmore says. "They're not the solitary animals many perceive them to be."

For this reason, shelter workers are making a concerted effort to say a cat's name more often and spend time brushing each feline.

"We also wash the faces of sick cats to make them feel better, and run our fingers through their kibble to motivate reluctant ones to eat," Dr. Smith-Blackmore says.

Take a Kitty to Work Day

To help speed up socialization, some shelter workers are sharing their offices with one or two cats each day to expose the felines to normal sounds, smells and sights. At the Animal Rescue League of Boston, staff members fit lightweight Plexiglas into office doorjambs so that the cats can look out without escaping.

Video Made the Feline Star

The San Diego Humane Society creates short bios for each of its adoptable cats, as well as videos that show them interacting with people and playing with toys. At the end of each video, potential owners can click on one of three call-to-action buttons: Adopt Me, Sponsor Me or Spread the Word.