How to Train Your Dog to Wear a Head Halter 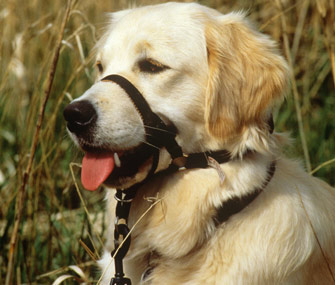 Alamy
With time and patience, you can teach your dog to accept wearing a head halter.

Q: My dog hates wearing a head halter and won't come anywhere near it. She's difficult to control, though, and without it, I would have to go back to the prong collar, which I'm hesitant to do. Is there anything I can do to help her learn to love her head halter?


Don’t give up! With the right training, it’s possible to change your dog’s reaction to the head halter. And it’s worth the effort: Head halters are more effective and have fewer drawbacks than prong collars.

Head halters can provide increased control over a dog’s momentum and direction, making them effective tools for safely redirecting a strong, hyperactive or reactive dog. One of the major drawbacks of head halters, though, is that some dogs have trouble adjusting to them. But in most cases, even a dog with an established negative association can be trained to willingly wear a head halter.

A head halter requires a different technique than a corrective collar. When using a head halter, it is important to keep pressure gentle when the leash is tightened. As soon as the dog does what is being asked, such as turning toward you or stopping, immediately release the pressure. The leash should never be yanked, jerked or otherwise harshly pulled or popped in the way you would do with a corrective collar.

The amount of training required to get a dog to willingly wear a head halter varies depending on the dog. For some dogs it may take only a couple of sessions, while others may require more extensive training and a slower pace.

Here’s my head halter training how-to. These steps work for dogs who are new to wearing head halters and for those with an existing negative association.

Teaching Your Dog to Accept the Head Halter

Introduce the head halter. Hold the head halter in your hands for the dog to investigate. Mark any sign of interest, such as sniffing or moving toward the halter, with a click or verbal cue (“yes” or “good”) and follow up with a treat. Don’t move the halter toward the dog; instead, allow the canine to approach at his own pace.

If a dog is hesitant to investigate, lay the halter on the ground and toss treats around it to entice him to approach. Once your dog is comfortable with the halter on the ground, transition to holding it in your hands. Start by touching the halter while it remains on the floor; progress to lifting it slowly off the ground until it’s at the height of the dog’s face. Each time you touch or move the halter, reward your dog with treats and praise.

Once your dog willingly puts his nose through the loop, get him used to the feeling of light pressure on his muzzle by gradually reducing the size of the loop. If he attempts to go around rather than through the halter loop to get the treat, pull the treat hand back and move the halter so it is again the separating barrier. Eventually, your dog will learn that the only way to get to the treat is through the nose loop.

For especially hesitant dogs, move the lure hand through the nose piece and toward the canine, as if it were the dog’s muzzle. Gradually move your hand back through the loop so the dog’s mouth moves through completely.