How Working Dogs Are Helping With Wildlife Conservation 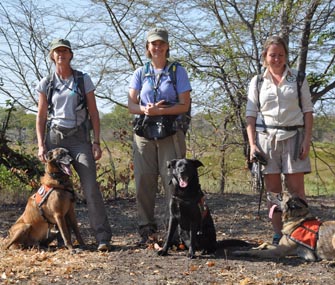 Photo by Green Dogs
A group from Working Dogs for Conservation.

Wicket had been in the shelter for six months. She was the sort of intense, high-energy dog that rescuers despair of placing in a home. So when Aimee Hurt expressed interest in the year-old Lab-Shepherd mix, she says even the staff members were surprised: "They were like, that one? That one is crazy." Hurt, who had taken Wicket outside and seen her ignore everything around her in obsessive pursuit of a ball, agreed. "But she might be the right kind of crazy," she said.

Wicket indeed turned out to be exactly the right dog for the job at Working Dogs for Conservation, a Montana-based nonprofit that helps with wildlife and conservation research.

"From Day 1, she was really tuned in and waiting for a command. She was really people focused," Hurt says. "She had a lot to prove with me because she was my second working dog, and I loved my first one. She was just different — in all the perfect ways, as it turned out."

What Animals Leave Behind

Wicket is now being trained to sniff out her 21st target species, in preparation for a trip to Myanmar to look for elephants — or, to be more precise, for their dung.

"That is our most common project, looking for scat," says Megan Parker, one of the organization's founders, "because scat and dung are phenomenally data-rich little packets of information."

Examining droppings allows researchers to gather all kinds of information without disturbing — or even seeing — wild animals. "They have DNA, so you can extract genetic information. You can often tell individuals apart," Parker says. "You can get hormones, you can learn the sex, you can get disease and parasite information, diet information. And you can just tell where in the landscape the animal was, because it had to be there to poop."

"We often start the dogs on captive zoo animals," Parker says, which helps the dogs learn the basics of the species. "But wild individuals and captive individuals definitely smell different, and it's not just diet — the dogs seem to ignore diet for the most part. So we try to get wild animal dung or scat from the area we are working."