How Your Dog Can Save You From Kissing First-Date Frogs 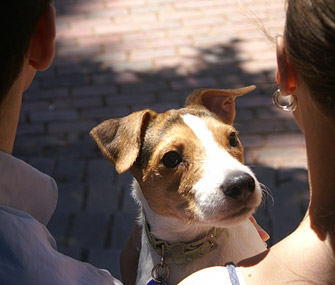 The secret is out. I’m a serial avoider when a guy I’ve designated to the “friend zone” leans in for a kiss — and since I'm a dog trainer, it’s become second nature to use canines as a way to deflect him. It’s not that I don’t want to share that special moment with someone — I just haven’t found my prince yet.

So at the risk of exposing my clever dating tactics, here's how you can train your own dog — and, no, it doesn’t have to be a German Shepherd or Doberman Pinscher — to put the kibosh on unwanted (albeit harmless) advances from would-be Romeos.

I always advise pet owners to put their dogs in crates while driving. That said, there are certain risks that need to be taken to avoid an even bigger threat: a date who attempts to plant one on me in the car!

To prevent this situation when the car is not in motion, I like to position the dog between us, whether it’s a gigantic canine whom I can coax forward from the back seat (so his slobbery panting separates us) or a miniature dog who's conveniently placed on the console.

Either way, be sure that the dog serves as a hairy fortress wall to protect you from romantic glances — in the form of sly smiles, eyebrow flashes or the dreaded lean-in — and roaming hands, which can be subverted if you pet your dog with the same dedication a Ferrari dealer would apply to waxing a showroom car.

Dog body-blocking is an art that must be mastered ahead of time in order for it to look normal and not painfully obvious. During such tense, TV-watching moments, immediately deploy your furry fire extinguisher to put out a potential inferno while it’s still a spark.

If you have a small dog, scoop him into your arms and plant numerous kisses on his forehead with gusto. Not surprisingly, the idea of a three-way kiss with a snorting Pug will cause many men to abort their missions.

Large breeds work equally well as date-night bodyguards. I was recently aided by my date's own Rottweiler, who intuitively stepped between us at just the right moment. When I sensed a lip lock was looming, I pretended to be very concerned with the length of his dog’s nails.

In emergency situations when even body-blocking isn’t working, promptly launch into a gross-out tactic by verbally noting a gigantic eye booger that needs to be removed or how you hope that your dog's explosive diarrhea doesn't return on his evening walk. Trust me, this destroys all romantic vibes instantly.

There’s the saying that all men are dogs. I can only hope to one day find a man whom I love as much as my Pugs. I also hope that he doesn’t use these tactics on me.