Home ›
Our Pet Experts ›
I Work With Animals: My Life as a Beekeeper

I Work With Animals: My Life as a Beekeeper 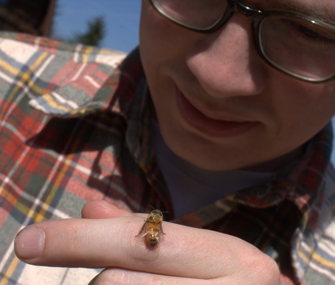 Courtesy of Matt Reed
Matt Reed examines one of his honey bees.

To know Matt Reed is to know his bug obsession. As a kid, he always hoped to work with insects when he grew up. Practicality took over and he ended up going into IT instead, but his love for the little critters never waned.

“Whenever I'd see a bug in my apartment, I'd get excited,” he says. “Everyone would be screaming or ready to kill the bug, but I'd want to save it.”

It seemed insects would simply be a hobby for Reed — until one day in 2008, when a fateful bee changed everything.

Three years later, he and his wife, Jill, have 30 hives and run Bee Thinking, a Portland, Oregon–based beekeeping supply shop that specializes in selling alternative beehives. We sat down with Reed to find out the buzz on his curious side project.

Q. What inspired you to get into the beekeeping business?

A. Reed: I saw a bee lying on a windowsill at home and decided to save it, so I warmed up a plate and put a few drops of honey on it. The bee was exhausted, but she managed to land on the plate, walk to the honey and start drinking. She immediately had more energy. I took her to the porch, she ate some more honey from the plate and then she flew off. Later that day, my wife was leaving for work and she noticed a bunch of bees on the screen door. My bee had given them the message that our house was the place to be. I was fascinated. A month later, I had my first hive.

Q. How did you educate yourself about beekeeping?

A. I bought every book that I could find on the subject, which were helpful for the basics and history, and the Internet was great for learning about what's going on with beekeeping right now. That's where I first learned about alternative hives, which allow the bees to build their own comb, rather than having to work from an artificial one.

Q. Was it smooth sailing from the start or were there mishaps along the way?

A. At first, it was a lot of trial and error — mostly error. I got stung a lot, and I killed a lot of bees, which was demoralizing because I just wanted to help them.

Q. How many hives do you have now?

A. Five in our backyard, and about 25 spread out across five other [neighbors'] backyards. Last year, we got about 400 to 500 pounds of honey — and that wasn't a particularly good year! 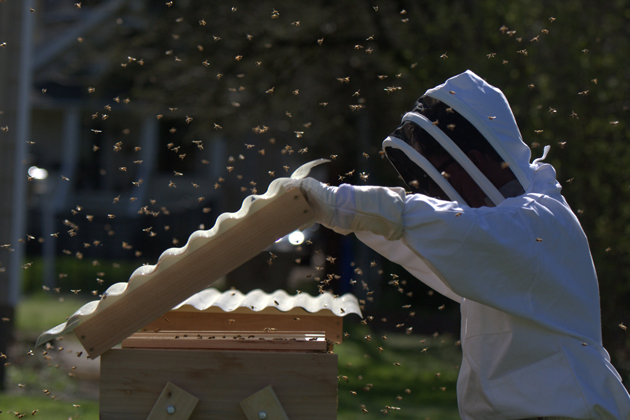 Courtesy of Matt Reed
Reed dons his beekeeper's suit to inspect one of his hives. Last year, he produced about 500 pounds of honey.

Q. What type of honey do your bees produce?

A. We call it wildflower honey. It tastes different every year, depending on what flowers are thriving. My wife used to work in the wine business, and she compares it to the way the soil influences the flavor of wine. Flowers are honey's terroir.

Q. How much maintenance do hives require?

A. It depends on the hive. Some are very hands-off, with almost no maintenance. You just place your bees in the spring, check once a month to make sure the bees have enough space, and harvest the honey in the fall. Others require a little more work. It really all comes down to making sure the bees have enough room to work. Otherwise, they'll swarm.

Q. How did you make the jump from beekeeping as a hobby to building a business around the idea?

A. I started building my own hives; I blogged about the construction process. People read my blog and contacted me about buying my hives. I knew that if there was that much interest online, there would be enough interest to support a storefront. We sell our honey at the store, but our main source of income is the hives and swarm removal. My wife quit her job to run the shop. I still work in IT for a local software company, but we hope to make the shop our sole source of income eventually.

Q. Have you noticed whether urban beekeeping is on the rise?

A. Oh, absolutely. One of the biggest indications is the competition for swarm removal. When someone has a swarm of bees in their yard, they call a beekeeper to come and remove it. If you miss the call, they'll go down the list and find someone else. Sometimes you'll end up with two or three beekeepers at a house fighting over who gets the swarm.

Q. What would you say is the biggest misconception about bees?

A. A lot of people think of bees as aggressive insects that are out to sting them. In reality, they're incredibly docile. As long as you don't threaten them, they'll leave you alone. I mostly work without a protective suit because I'm not worried about getting stung.

Q. Any advice for someone who's thinking about breaking into the business?

A. Read as much as you can, and talk to as many beekeepers as you can. If you don't know what you're doing, it's going to be a bad experience for everyone involved — you and the bees.

For more tales of what it's like to work with animals, check out these other Vetstreet-exclusive stories.