Home ›
Our Pet Experts ›
Linda Fiorella ›
I Work With Animals: My Life With Alpacas

I Work With Animals: My Life With Alpacas 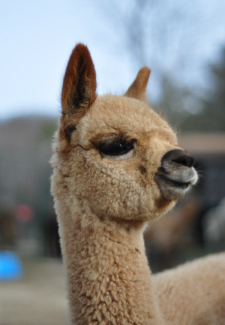 Val Newell was happy — married and raising her daughter — yet she dreamed of something more. But how many of us yearn for fulfillment through yurts and alpacas? In 2003, the Newells — Val, husband Gary and daughter Annie — established Crown Point Alpaca Farm at The Green Alpaca in Strafford, N.H., where they raise Muscovy ducks (for eggs), have close encounters with snapping turtles, offer guests the chance to slumber in a yurt, and raise a variety of alpaca breeds.

Now the only thing Val yearns for is the occasional vacation. We asked her to share with us what it's really like to spend your days tending to a pack of alpacas.

Q. What inspired you to move to an alpaca farm?

A. Newell: "I had a small house, with very little land, and I was raising my little girl. As I watched her play in our tiny yard, I longed to see her enjoy farm life, collecting eggs and being around animals. I believe we can learn much from the stability that comes from caring and interacting with animals.

What appealed to me about alpaca farming, in particular, would have to be that these were animals who gave fiber as a product, instead of meat. I personally did not want to be involved with that aspect of farming."

Q. Which came first — the alpacas or the yurt?

A. "That's a funny question! I actually had pictures of yurts up years before I got the alpacas. I always said, 'Someday, I want a yurt.' I did purchase the alpacas first, and then I put the topping on the cake, so to speak, by adding the yurt. I thought, 'What better way to actually experience firsthand how good it feels to spend time on a farm with these gentle animals than to include a yurt to stay in!' ”

Q. What qualities are important for successful alpaca farming?

A. "Patience is required to understand their makeup. Alpacas need firm but gentle leadership. Although they're not obedient to their owners, I would say that alpacas are compliant. Once they know what you want them to do, they want to do it — so you will go away and let them be already! Some alpacas can be bribed to do something by using a juicy carrot, but most 'decide' on their own to do what you want.

Diversification is also very important. Since alpacas are fiber animals, learning about fiber qualities and how to use and make products from the fiber is just as important as knowing what to do with eggs or tomatoes. As far as raising the animals, they are very hardy, ask for very little and expect nearly nothing — but you need a keen eye for normal behavior. You need to know when they are not acting 'right' because they typically don't show symptoms of illness until they are very, very sick." 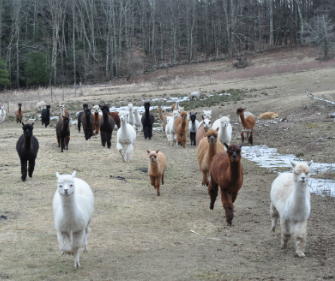 Q. What else can you tell us about alpaca personalities?

A. "They are simply amazing. I would say that alpacas are highly intelligent, curious, self-sufficient and herd-oriented. Alpacas are known to show extreme gentleness toward children and challenged individuals. People who visit and share time with the alpacas will often say that they feel peaceful when the alpacas are around. I don’t really question why because I feel it too. It's one of my favorite things about them.

There's a fallacy that was promoted in the alpaca industry for many years that 'alpacas are a huggable investment.' For the most part, alpacas do not like to be hugged, even if you want to hug them! They are very cute, their eyes are huge and they do have a way of looking into people instead of at you. They display affection by gently bringing their noses to you — and they may briefly kiss or nuzzle certain people. They enjoy their herd, and family members stay close. In fact, alpacas can remember herd mates whom they haven't seen for many years."