Is a Dog’s Roll Over Move Really Submissive? 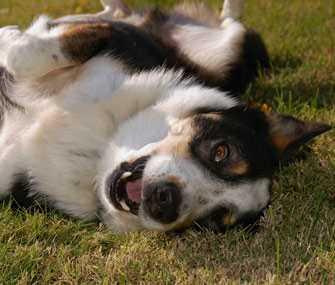 Thinkstock
New research suggests that when dogs roll over during play, it might not be out of submission.

Most people assume that when dogs are playing and one of them rolls over, they’re being submissive, and saying, “OK, you win.” But new research from the University of Lethbridge in Canada and the University of South Africa suggests something different. The team watched a female dog play with 33 separate partners of different breeds and sizes. They also analyzed 20 YouTube videos of dogs playing. Each time a dog was observed rolling over, they characterized it as submissive, combative or defensive. They found that most of the rollover maneuvers they observed were defensive — and none were submissive. The study was published in the journal Behavioural Processes. — Read it at Discovery News