Home ›
Our Pet Experts ›
Amy Sinatra Ayres ›
It Takes a Village: An Inside Look at the San Diego Zoo's Giant Panda Program

It Takes a Village: An Inside Look at the San Diego Zoo's Giant Panda Program 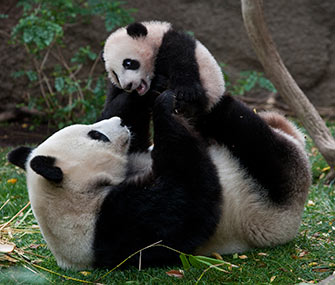 They’re exotic, lumbering and lovable. And for the handful of zoos in the U.S. that have them for residents, giant pandas are almost always the star attraction. The San Diego Zoo is now home to three of the endangered creatures: Bai Yun, Gao Gao and their offspring, Yun Zi, who was born at the zoo in 2009.

So what does it really take to care for these bears every day?

Vetstreet caught up with members of the San Diego Zoo’s panda team — an impressive collective of zookeepers, veterinarians and researchers — to get the inside scoop on what it’s like to be among the select few people in the country who get to work with the iconic critters.

For a panda keeper, each day starts bright and early. Two keepers arrive at the zoo at 6 a.m. and get to work cleaning the exhibits and the animals' six bedrooms — as well as feeding the trio their breakfast bamboo.

Their jobs may not be glamorous, but they are rewarding.

“I really enjoy coming into work and having the pandas greet us,” says senior keeper Jennifer Becerra, who's worked at the San Diego Zoo for nearly five years. “Knowing that we are working to make their lives more comfortable is a great feeling.”

The pandas recognize the keepers' uniforms, individual smells and their voices — and the bears bond with certain keepers more than others.

“We all have different relationships with each of the bears,” Becerra says. “When Yun Zi was younger, he seemed to respond to me better and picked me as his favorite.”

The bears get their second helping of bamboo around 11 a.m., followed by a third feeding at 3 p.m., but Becerra says that they’ll eat throughout the day, anywhere from five minutes to two hours at a time.

“They spend around 12 hours a day foraging and 12 hours resting,” she says, adding that the keepers also work with the pandas on enrichment and training.

“We have different types of enrichment to stimulate an olfactory reaction, a play reaction or a feeding reaction,” Becerra says. “We use various perfumes, spices and colognes for smells. We also offer the bears pine shavings, mulch and dirt to roll in. And they have a range of plastic toys in which we can hide food to stimulate natural foraging behavior.”

As for training, the bears each know how to sit, put their paws up or down, open their mouths, lie down and roll on their sides.

“Our adult female [Bai Yun] will give us a urine sample on command and lay down for an ultrasound,” Becerra says. “And our adult male [Gao Gao] will put his arm through a sleeve, so that our veterinarians can get a blood sample.”