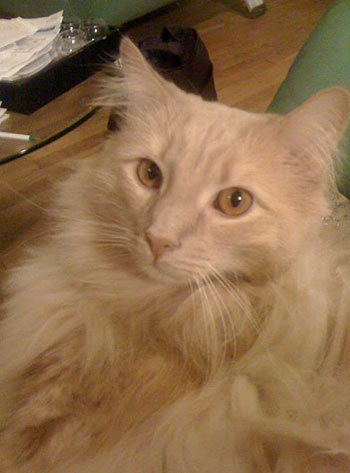 The latest casualty of Hurricane Irene may be Jack the cat, who went missing last week at New York's John F. Kennedy airport. But the story will have a happy ending if pet-loving communities of Facebook and Twitter can help it. Jack’s owner, Karen Pascoe, was flying to San Francisco with Jack and his pal Barry last Friday before the airlines started canceling flights as the hurricane closed in. The cats were checked in as cargo, and it wasn’t long after when Pascoe got a call from American Airlines that Jack had somehow escaped from his carrier. Frantic efforts to find him in the massive baggage terminal were unsuccessful, and Pascoe had to get on her flight. But not before leaving behind word with a community of animal lovers that rapidly grew to thousands through social media, thanks to the Jack the Cat page on Facebook and matching account on Twitter.

The posts are mostly hoping Jack is found, since many people can’t help with searching for the handsome long-haired cat. But beyond the words of sympathy and hope, the pages serve to put the airline on notice that they need to look for the cat. In fact, the social media outpouring on American’s own Facebook page got the attention of the airline, which assured everyone that its folks at JFK were still looking for Jack.

Jack may still be caught and returned to Pascoe, but an earlier lost pet – Vivi the Whippet, lost while in Delta’s care in 2006 -- was never found at the same airport.

While cases like Jack’s and Vivi’s get a lot of attention, the truth is that airlines move a lot of pets, and have a pretty good track record for doing so. The vast majority of animals make it through the airline system no worse for wear, according to mandatory reports airlines must file with the federal government.

But the fact that airlines are generally pretty good with pets is no consolation if the pet who's lost or killed is yours. The difference between a safe trip and disaster? You. Here are five things to do before flying with your pet:

1) Consider if Your Pet Is the Flyboy Type

The highest fatalities for pets shipped by air are for so-called brachycephalic breeds — shortnosed pets such as Bulldogs, Pugs and Persians. These pets have difficulty breathing when overheated or stressed, and are best put on the Do Not Fly list if at all possible. Additionally, if your pet is elderly or has a chronic illness, you should consult with your veterinarian before putting him on a plane. For all pets, you’ll want to ask about the weather: Too hot or too cold and your pet can’t fly.

2) Talk to the Airline

You’ll need to have a reservation for your pet even if you have a ticket, because there are limits on the number of animals allowed on each flight — typically two in the passenger compartment (for small pets whose carriers fit under the seat) and two in cargo. You also need to know where and when your pet has to be presented, and what papers — health certificate, and so on — you'll need to bring. Don’t forget to ask about costs, so you won’t be surprised. Direct flights are always better, but if you have to make connections, ask the airline to confirm that your pet made it onto the plane.

3) Get the Right Carrier

For pets who'll be traveling in the cargo hold, use a hard-sided carrier designed for air travel, and make sure it's in good condition (no cracks in the plastic, no rust on the grating). The crate should be just big enough for your pet to stand up and turn around in. Check and double-check that all the bolts securing the halves of the carrier are in place and tightened. Bring zip-ties to secure the door just before you turn your pet over to the airlines. For pets traveling in the passenger compartment, you’re better off with a soft-sided carrier.

If haven’t microchipped your pet, do so before the flight. If your pet does get loose, that microchip could save his life. A well-fitting collar and ID are a must for pets in the passenger compartment. In cargo, it’s not safe to leave a collar on a pet. Take a marker and write your information boldly on the crate, and don’t be shy about appealing to the pet-lovers at the airline: “Hi, I’m Fido, and I am a child’s pet! Take good care of me, please!”

5) See Your Veterinarian in Advance

While most people assume pets are best sedated, veterinarians say the reverse is true: Pets do better when not sedated, because the medications may diminish an animal’s ability to regulate its body temperature via panting. Your pet may be an exception to the rule, however, which is why you need to talk to your veterinarian. You’ll need to schedule an appointment a few days in advance, anyway, to get the mandatory health certificate your pet need to fly.

If you’re informed, well-prepared and ready to be a little pushy on your pet’s behalf, chances are very good your pet will have a problem-free trip. It’s worth the time and effort on your part to make the skies as safe as can be.

In the meantime... Jack, come home!