Home ›
Our Pet Experts ›
Dr. Patty Khuly ›
Keep Your Cats Indoors! Do It for the Birds!

Keep Your Cats Indoors! Do It for the Birds!

Is it wrong to let your cat roam free? 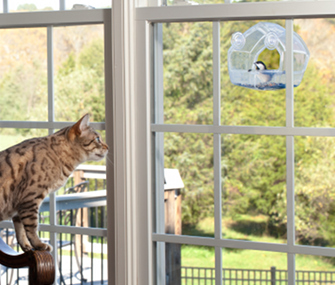 Dr. Marty Becker tackled that quandary a couple of weeks ago in his post on barn cats. His take was that house cats should always remain indoors for their health and safety, but working felines, like his rodent-controlling barn cats, are an exception to the rule.

I wholeheartedly agree. But there’s yet another reason to keep your cats indoors: birds.

It’s no secret that kitties kill birds. This is why several avian advocacy organizations — the National Audubon Society and the American Bird Conservancy, among others — have mounted formidable campaigns designed to cajole the U.S. public into keeping their cats inside.

The contention of organizations like these is that the environmental and animal welfare impact of cats, who predate upon birds, is more significant than we can properly quantify. Indeed, they propose that cats (even well-fed cats who kill birds instinctively when given half a chance) might even be responsible for the decimation of many sensitive avian species.

According to the American Bird Conservancy, which initiated a “Cats Indoors” campaign in 1997 to publicize the issue, many species have been impacted by feline hunters, including songbirds like the Cardinal, Blue Jay and House Wren; long-distance migrants, such as the Indigo Bunting and Yellow Warbler; rare and endangered species, like the Piping Plover, Florida Scrub-Jay and California Least Tern; and birds that nest or feed on the ground, such as the California Quail.

At issue is whether cats kill birds in significant enough numbers to make allowing them to roam free a bona fide moral concern. In other words, if you let your cat outside, are you effectively contributing to the degradation of our environment in ways that you don’t currently appreciate — and ultimately shouldn’t allow?

The advocacy groups would have you admit that it’s actually immoral to let your cat roam free. In fact, that’s why most of them are opposed to trap-neuter-release programs that allow colonies of feral cats to persist in the environment. They argue that the wholesale eradication of the interloping, non-native predator is the only solution to a problem in which the rights of one sensitive group of animals are pitted against another’s unnecessarily predatory ways.

A Vet's Take on the Outdoor-Cats-Who-Kill-Birds Conundrum

After pondering this one for years now, I have to confess that I’m still on the fence. While all cat owners should do everything possible to keep their kitties safe and secure indoors, there’s a huge gray area here to ponder. Things to consider:

Do you live outside an ecologically sensitive area or a crucial migratory path?

Do you make sure that every cat you care for is spayed and neutered, and receives veterinary care?

Have you considered building an outdoor catio to keep both cats and birds safe and secure?

Have you done everything possible to ensure that your free-roamers wear bells to warn birds away?

If you’ve answered yes, yes, yes and yes, then you get a pass from me.

So do your cats get free range outdoors? If so, how do you feel about this controversial topic?