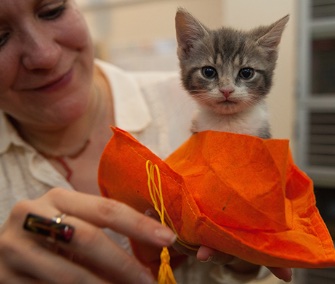 ASPCA
Nearly 300 kittens have graduated from the ASPCA's new kitten nursery during this year's kitten season.

With the end of kitten season, an adorable class of kittens graduated from the ASPCA’s new kitten nursery in New York Tuesday. The nursery opened in June, during the height of kitten season. Nearly 300 kittens who were taken in with their nursing moms or as orphans have graduated since then. They received extensive around-the-clock medical care and behavioral rehabilitation during the months they spent at the nursery from specially trained ASPCA staff and volunteers. The graduates, who’ve been microchipped, vaccinated and spayed or neutered, are put up for adoption at 8 weeks old at the ASPCA Adoption Center in Manhattan. — Read it from the ASPCA