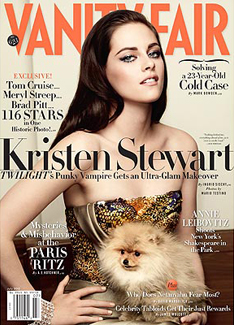 The July cover of Vanity Fair features Kristen Stewart, Parisian couture and ... a Pomeranian? It sounds like a strange combination, but this adorable dog looks like he's having a great time posing with the Snow White and the Huntsman actress. And we're sure Stewart felt right at home, too — she has two dogs of her own.

In an interview with Teen.com earlier this month, the starlet gushed about her doggie duo, Max and Bear. Stewart and her boyfriend, fellow Twilight vampire Robert Pattinson, rescued Bear from a shelter last year while shooting Breaking Dawn. The actress shared that she has a different relationship with each of her pups.

"Bear is literally a child. He's still a baby," she told Teen.com. "And Max is like, I mean, we live together. He's like my roommate. So there is a difference there."