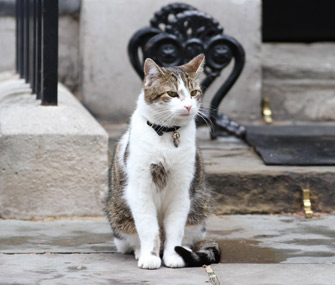 Alamy
British Prime Minister David Cameron may be resigning, but Larry the cat will keep his job as chief mouser at 10 Downing Street.

British Prime Minister David Cameron will resign his position Wednesday, making way for Theresa May to assume the post and move into the prime minister’s famed 10 Downing Street address in London. But Cameron’s cabinet has confirmed that Larry, the chief mouser at the residence, will keep his job. The “civil servant” tabby was adopted for his predatory skills in 2011, but he’s long been rumored to be less than stellar at the job. Still, he’s hoping to make a good impression on his new boss. “Does anyone know a good cat groomer available tomorrow? I need to make a good impression on someone on Wednesday …” read a Tweet from an account set up under Larry’s name. Cameron’s departure comes in the wake of the country’s historic Brexit vote. — Read it at the U.K.’s The Guardian