Learn How to Train Your Cat to Lie Down 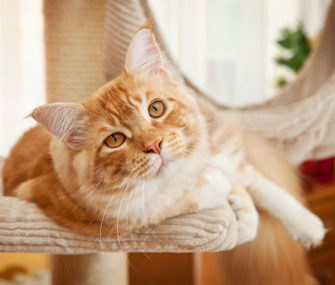 Thinkstock
One way to teach your cat the down command is to wait for her to naturally go into the down position and then mark her behavior with a clicker or word and give her a reward.

As an animal trainer, I enjoy training cats to do simple-yet-unexpected tricks. It’s fun to see the surprise on a person's face when they see a cat sit or lie down on command. Suddenly, their house cat is an Einstein kitty!

A cat’s ability to learn new tricks is valuable for a variety of reasons, from deepening the cat’s relationship with humans to helping resolve problem behaviors. Fortunately, you don’t have to be a professional to train a cat: Felines are typically willing participants in training when behaviors are broken down into easy-to-learn steps and the cat is rewarded for performing them.

If you and your cat are new to clicker training, begin with a review of training basics, including how to use rewards and marker signals to pinpoint the behavior that’s being rewarded. Once you’ve done that, you can move on to teaching your cat to lie down.


“Down” — when the cat moves in to a lying position in response to a command — is an ideal starter trick for cats new to training. Because this is commonly deemed a dog trick, it is impressive and surprising when a feline goes into a down. This trick isn’t just fun, though; down has various real-life applications. It can be used to reinforce resting in designated kitty spaces instead of in other off-limits areas of your home and it can be useful if your cat is prone to dashing through open doors. It also gives your cat a way to interact with people and can be used to replace less desirable behavior like biting hands when playing.

It is important to start with a realistic expectation of what a cat’s down will look like. A cat’s down will likely not exactly mimic the down of a dog. Unlike dogs, who are comfortable plopping themselves onto the floor, many felines prefer to lie down in elevated areas. A cat is also less likely to thrust herself into an immediate down at military pushup pace. Instead, she will more often ease herself into a comfortable lying position at a leisurely pace.

Cats aren’t selective about where and how they lie down because they’re pampered and pompous (at least not most!) — it’s simply part of their nature as both predator and prey. Because down can be a vulnerable position, your cat may prefer following the command on a high, familiar space like a perch, bed or other cat-approved furniture. To make your training go smoothly, teach the down in spaces where your feline is already willing to rest.