Love Letter to Felix the Dachshund 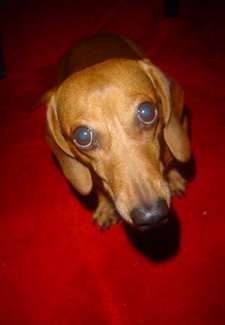 Liz Ozaist
See what I mean about those melt-your-heart eyes?

I still remember the winter night that he came into my life. It wasn’t exactly a typical storybook new romance — but I certainly fell for him. Hard.

He was the runt of the litter, all floppy paws and ears as he tried to nose his way in between his very type A brothers and sisters to check me out. I wouldn’t have noticed him if not for his gemlike big eyes, which my husband would later capture on canvas in a way that always reminds me of that first fateful meeting between me and my beloved boy.

To be honest, I found myself at the breeder’s home on that nippy winter evening because my father wanted a dog — a Dachshund, to be precise. Somehow, whenever my dad asked for something, I could never say no — even if I knew most of these “asks” were inevitably no good, very bad ideas.

This was definitely up there. My father, in all his brawny European manliness, was no match for a timid dog who preferred blanket snuggling to swimming in the giant, scary ocean with my dad. Yes, as bizarre as it sounds, I just couldn’t deny my father a dog. (I know, it’s usually the other way around.)

So that is how I found myself driving a trembling scrap of a pup home to my no-pets-allowed Brooklyn apartment — and how my then boyfriend’s new leather jacket ended up covered in kibble.

Felix eventually got over his carsickness, but he never quite recovered from his one-year stint with my loving, yet incredibly impatient and boisterous dad. 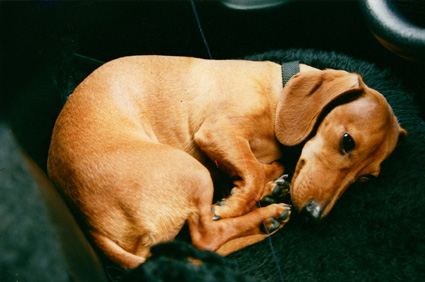 Liz Ozaist
Felix back in his youngster days.

In a way, I think that’s why we bonded, Felix and I. We had something truly unique in common: We’d both survived the Victor Ozaist style of child rearing — tossed into the ocean, with absolutely no warning. (That’s how I learned to swim, too, and how both Felix and I ended up absolutely terrified of water as “kids.”)

Halfway through his puppyhood, my father whisked Felix across the country with him. When I went to visit them in Arizona around Christmastime, Felix came flying down the dusty, ochre-colored road toward me with a look on his face of “Get me the hell out of here!”

Like I said, he’s more of a blanket snuggler.

Needless to say, he was almost one and not even remotely housebroken. Of course, this may have had something to do with the fact that my father would let him out into the “yard,” which was essentially a vast open field patrolled by coyotes.

Felix did not leave my side that entire trip. This did not go unnoticed with my father. When he came back East a month later, I was informed that he was now my dog — and it wasn’t up for discussion.

Secretly, I’d been hoping for this very outcome. Of course, it meant that I had to move, throw out my rugs and essentially change my carefree, come-home-when-I-feel-like-it New York City lifestyle. But it was OK.

Over the years, Felix turned into my one constant during some pretty tumultuous times — an ever adoring, sweet constant who can charm nearly everyone who crosses his bark-filled path. You just have to do it on his turf, at his pace. I get it. 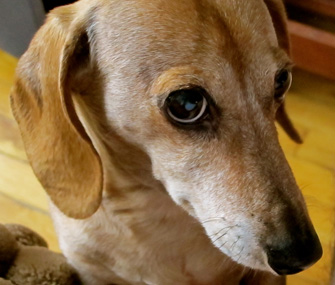 Liz Ozaist
Felix is now a senior pup — and even more charming.

Somehow, 12 years have crept up on Felix, who’s a little slower during his happy skip through Prospect Park and a tad creaky going up the stairs. Now into his twilight years, he’s got a heart murmur — as do I. (I know you know what I’m thinking here.)

And those gemlike eyes are bordered by a dignified face full of white flecks of fur. Or, as my leather jacket–wearing husband likes to say, “He’s the George Clooney of dachshunds!”

When my father passed away a few years ago, I remember thinking, “Well, it’s just you and me now, buddy. We’re the last Ozaists standing.”

It’s amazing how love works sometimes. It can creep up on you in the weirdest ways — like in the form of a 10-pound dog with amazingly soulful eyes and a slightly broken heart that has nothing but pure love to give.