Tomorrow marks a big day for one truly big-hearted pup: The winner of the 2012 American Humane Association Hero Dog Awards will be crowned at the Beverly Hilton Hotel in Los Angeles.

The black-tie, star-studded event — everyone from Betty White to Jewel will be in attendance — is designed to honor the many amazing canines who make a difference in the lives of countless people, ranging from therapy pups to search-and-rescue dogs.

This year eight dogs are vying for the top title, and Vetstreet caught up with the handlers and owners of four of the heroic canine contenders. 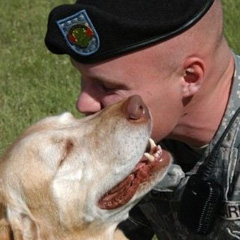 “We were deemed the most productive military dog team in the theater of Iraq in 2007,” says Gabe’s former military-handler-turned-owner Sergeant First Class Charles Shuck. “When soldiers died in Iraq, Gabe (shown at left) would represent a piece of home as grieving soldiers would hug him and cry on him. He gets the chance to be the voice of all military working dogs.” 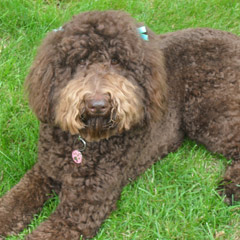 Courtesy of American Humane Association
Stella works wonders when she makes the rounds at hospitals and nursing homes.

In the span of just eight months, Marissa Levy had lost her father, her best friend and her dog. But once she adopted a Standard Poodle puppy, whom she named Stella Lenore in honor of her grandmother, Levy’s life began to brighten and have a compassion-filled purpose.

“I was at a dog park with Stella, who was about five months old, when a lady told me that my dog was exceptional and then asked if she was in training to be a service or therapy dog,” recalls Levy. “When Stella turned one, I enrolled her in the Therapy Dogs International program, and she breezed through. Today, we make therapy visits six days a week, and she seems to bring out the best in people — the staff at one nursing home told me that a man who had never spoken now has conversations with Stella but no one else."