Meet Teva, the Rescue Dog Who Sniffed Out Her Owner’s Cancer 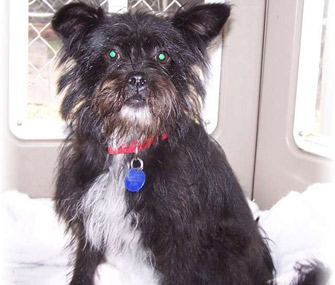 Teva the Affenpinscher mix is a registered therapy dog who sniffed out a cancerous spot on her owner's leg.

When Diane Hood adopted her 7-year-old Affenpinscher mix six years ago, she had no idea her new dog would save her life.

Within the first week of arriving at Hood’s home, the little dog, whom she named Teva, became obsessed with a small dark spot on Hood's leg. Hood thought the spot was just a bug bite. But it was something much more dangerous: squamous cell carcinoma, a potentially deadly form of skin cancer.

Today, Hood is cancer-free, and Teva is a therapy dog. Together, they bring happiness to people at nursing homes.

We caught up with Hood, a retiree from Sequim, Washington, to learn more about her pup’s remarkable rescue story.


Q: Can you tell us the story of how you rescued Teva?

A: My dog, who was 17 years old, died, and I was going to get this big, calm dog to replace it, and I saw [Teva's] picture on Petfinder. She was a year old and had never had much of a home.

I almost didn't get her. I was going to meet her and I almost had a stroke. My arteries narrowed down in my neck from stress. So I waited a month, and the one other person [the rescue] interviewed didn't want her, so I got to have her when I met her.


Q: Do you know anything about her life before you found her?

When she was a couple of months old, she was in Ellensburg, Washington, and the people that had her put her in the pound because she was too friendly — she jumped on everybody and they didn't want that. A rescue group took her in and ended up having her until she was a year old. I can’t think of why they kept her so long, because she was so cute.

Q: What was she like when you first brought her home?

The first week I had her, she found cancer on my leg. I had a dark spot on my leg and I thought it was a bug bite or something. There was no reason for her to sniff it. After a week of her being obsessed with [the dark spot], I went to the doctor and [found out] it was cancer. They took a chunk out of my leg. It was squamous cell carcinoma.