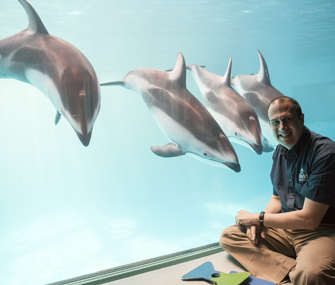 It is impossible these days to turn on the national news without hearing an update on the conflict in Crimea. This week, a story that involves animals caught our attention.Now that Russia has annexed Crimea, it has reportedly also seized dolphins that were trained for the Ukrainian military. The idea of dolphin soldiers may sound like something from a James Bond movie, but it's real — and not just in Crimea. The United States Navy has long had a marine mammal training program. In fact, the Ukrainian dolphins and the U.S. Navy dolphins are trained to do essentially the same job: use their echolocation abilities to find things underwater, such as land mines and scuba divers.

Giving this story an even more 007-like twist are rumors that the Ukrainian dolphins were trained to carry weapons and attack enemy scuba divers. (The U.S. Navy strenuously denies such rumors about its own dolphins: "The Navy does not now train, nor has it ever trained, its marine mammals to harm or injure humans in any fashion or to carry weapons to destroy ships.")

While attack dolphins sound far-fetched, our curiosity was piqued. Is it really possible to train dolphins to detect land mines in open water? And how do they know to return to their base when the mission is over? To learn more, we talked to Ken Ramirez, executive vice president of animal care and training at the Shedd Aquarium in Chicago and an expert dolphin trainer.

Out of the Wild — And Off to Work

In order for dolphins to detect hazards in the ocean, they have to be free to explore. So why don't the dolphins make a break for it when they are released into open water? Ramirez says it's because they're well cared for and seem to understand the benefits of returning to their handlers.

In the wild, dolphins spend a large part of their time looking for, chasing down and capturing food. Trained military dolphins are taught that when they complete their mission, they can return to their base and be fed, and apparently that choice makes sense to them. "The work the animals are being trained to do is far easier than the work they naturally have to do on their own in the wild," Ramirez says.

"One of the things you have to keep in mind is that most dolphin training is done using relationship building and positive reinforcement," he adds. "I think that when you're successful at it and the animals continue to come back, it's because it's a fairly easy way [for the dolphins] to earn a living."

As surprising as it may seem, the dolphins do consistently come back, even when they encounter temptations. Ramirez has seen this firsthand. He was working with two trained dolphins in the open ocean when they came across a pod of wild dolphins.

"The two dolphins went to join and play with them," he says. "On the one hand I was exhilarated to see them play, but on the other hand I was petrified — are they going to stay out there and not want to come back?"

The dolphins played together for about 90 minutes, and then the pod took off.

"For a moment my heart sank — until seconds later the two dolphins that we had worked with for years popped up next to our boats," he says. "They enjoyed playing with the wild dolphins, no question about it, but they came right back after 90 minutes of play, like, 'That's enough of that. Let's do our job; let's go home.'"