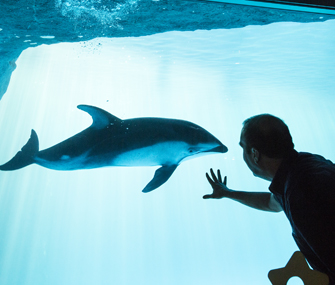 Photo courtesy of Shedd Aquarium/Brenna Hernandez
Ken training one of the dolphins at the aquarium.

Dolphins are ideally suited for underwater search missions; they have excellent echolocation abilities, a natural form of sonar where they bounce sound off objects and interpret the patterns that echo back.

"A dolphin naturally in the wild needs to know the difference when they echolocate between a fish with spines, a fish that's edible and a big shark that they don't want to bother with," Ramirez says. "They're all moving objects, but their echolocation paints a very vivid picture."

Training dolphins to identify mines and other objects and to distinguish humans from other creatures is actually pretty simple. They can already tell things apart, so it's just a question of communicating what the trainer wants through positive reinforcement. When the dolphin finds a metal object like a mine, he gets a fish — but not otherwise.

"In the basic stages of training, you're telling the animal, 'This is what's important to me,'" Ramirez says. "If you identify a rock, good for you, but you're not going to get reinforced for that."

That simple principle, combined with the dolphins' natural abilities, means they can be asked to find many things, including humans — even different kinds of humans. "You could train them to detect women only, men only, children only, humans only, humans with guns, humans with metallic devices on them," Ramirez says. "It's not a hard thing to train. We do a lot of work with discrimination tasks."

Attack Dolphins? Only in the Movies

Military dolphins and humans work as a team, with each doing what they are best at. For dolphins, that means finding things, not deciding what to do about them. Ramirez says that when a dolphin finds what he is looking for — "an intruder, a mine, an airplane at the bottom of the ocean" — he returns to the handler to report. It is up to the human half of the team to decide what course to take next.

In this context, then, it doesn't make sense that a dolphin would be taught to attack. While a dolphin can identify a scuba diver, he can't determine intent or whether the diver is an enemy or a friend. According to the U.S. Navy,"It would not be wise to give that kind of decision authority to an animal."

Ramirez also points to a practical concern: Training a dolphin to attack is simply not an efficient or sensible division of labor. As a trainer of service animals, he says, "you're always asking yourself, 'Is the animal going to be able to do this task better than anything else that's available?'"

When it comes to finding things underwater, the answer is yes — the dolphins' sonar can't be beat. But training them to attack is a different matter. Rumors of dolphins with weapons attached to their bodies seem particularly implausible to Ramirez. Because of dolphins' streamlined shapes, it has taken researchers a lot of time and money just to figure out how to attach research tools such as tracking devices and cameras to them. Mounting a weapon on a dolphin would raise a host of logistical problems. "For the knife to do any damage, it would have to stick out in front of the animal," Ramirez says, "and I can't imagine how that would work."

But even if a clever engineer could figure out how, that still raises the question of why."If you were going to train an animal to attack," Ramirez says, "you would probably use its natural abilities — a dog's ability to bite, a dolphin's ability to ram. It's still far-fetched, but certainly more reasonable than the idea of strapping a weapon onto its body. Why would you train an attack dog by attaching a knife to its head?"

Whatever the Ukrainian dolphins had been trained to do for the military, they'd actually been off the job for a while. After the breakup of the Soviet Union, the dolphins were reportedly retrained for other tasks, like working with disabled children. The military took them back in 2011 but had been planning to disband the program in April.

Ramirez says that it wouldn't have been hard for the dolphins to relearn their previous job, so that likely wasn't the reason for the planned shutdown.

"Animals that have learned behaviors can retain them for a really, really long time," he says. Like any complicated skill for any species, they may need a refresher course, but they would most likely be able to resume the work they had been trained to do.

But if Russia does decide to retain them as a military dolphin force, Ramirez says, it makes more sense that they'd use them for detection rather than for offense. "It just would seem illogical to waste the energy and time to train a dolphin to do something like that," he says. "What you are really wanting to use is their amazing echolocation abilities to use sound waves to detect what's going on in the water."