MTR doesn't generally own their horses. Most are on a free lease from their owners, and the organization takes care of all their expenses for as long as they're working. "It's a nice arrangement for both parties," Rodgers says. The owners still have some connection — some come and ride regularly — and when the horses end their careers, they can go back to their owners, eliminating the difficult task of finding a retirement home.

A potential horse starts with a 60-day trial period. "We do mock lessons," she says. "Nothing can perfectly simulate what they will see in the real-life program, but we do our best to put them through everything." Then, when the horses are ready, they start them with a couple of lessons a week and increase gradually.

The Best Breeds for the Job

Rodgers says that certain breeds of horses are generally right — or not right — for the job. Quarter horses, which they have four of at the moment, are good because they tend to be "stocky, level-headed and quiet," she says. The organization typically won't take something like a Thoroughbred: "They're bred for racing — we want them slow."

While the horses need to share certain basic qualities, they are still different horses with different personalities. One businesslike fellow is a pony called Bob, who came to them about a year ago. "He was dead quiet, he was good, he seemed to like his job," she says. "He was probably the fastest we've ever been able to get into the program. He was actively in lessons within the first month and a half." 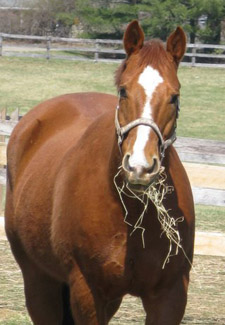 Photo courtesy of Maryland Therapeutic Riding
Apollo, another one of the therapy horses.

A flashier guy is a quarter horse called Apollo. "He's got this aura about him — he's like a stud, a big personality — but you can tell he really loves his job," she says. "He knows when to turn it on. He can tell when to be the therapy horse that he needs to be and when to challenge his riders."

Whatever breed or personality of the horses, working with them can have amazing effects on clients, both physically and mentally.

"I saw one little boy who was 4 years old and had never walked. He wasn't even crawling much," Rodgers says. "After just a few sessions with one of our physical therapists in our hippotherapy program, he was taking his first steps."

And simply learning to ride in the therapeutic riding program can work wonders as well. Rodgers once saw another little boy who was nonverbal say his first words in a riding lesson. "That wasn't the instructor's goal," she says. But the connection the boy had developed with the horse brought that out.

Rodgers seems almost a little embarrassed at how magical it sounds, but, she says, "There is something special about the horses — it's that silent language you're speaking with them. We literally see miracles all the time."

Other Vetstreet articles about service and therapy animals:

"I Train Guide Dogs for the Blind"

Lucas and Juno: The Special Relationship Between a Sick 4-Year-Old Boy and His Dog