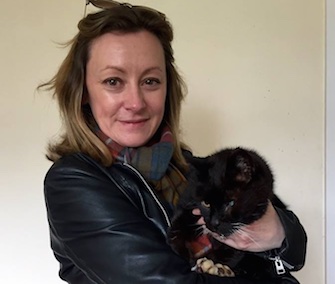 Dublin SPCA / Facebook
Georgie was reunited with his owner four years after he went missing.

Four years after he disappeared from his home in East Wall, Ireland, Georgie is back with his family. The black cat, who has only one eye, was brought in to the Dublin SPCA by a woman who’d been looking after him for the last year. “As with every dog or cat that comes into the shelter we automatically scan for a microchip and to our delight, Georgie was chipped,” the DSPCA said in a Facebook post last week. He was found about 30 minutes away from his original home, and a happy reunion ensued. “It was an emotional day for both the lady who had cared for Georgie and for Georgie's family who had desperately searched for their missing kitty,” the post said. — Read it at People Pets and find out what you should know about pet IDs