But, we didn't stop there.We poured over more than two million Lab names in our database to come up with the top 10 male and female names for the most popular dog breed in America. We've got the list below!

So, how do these Lab names compare to the top puppy names of the year? Let's take a look!

The most popular female puppy name of the year, Bella, wasn't asprevalent among Lab lovers — it came in at No. 6. And, in a bit of a swap, Molly, the No. 1 name for Labs, came in at No. 6 among all 2015 puppies. The second most popular puppy name, Lucy, also saw considerably less love with Labrador owners, as it ranked No. 5. 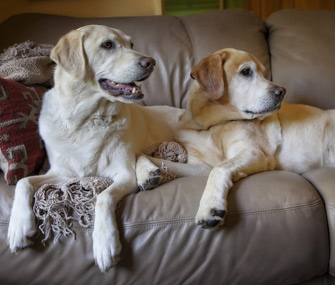 Robin Burkett, Animal Photography
What are the most popular Lab names? We dived into the data to find out!

Several other top female puppy names failed to make the top10 Lab mix at all: Luna, Lola, Zoey and Sophie.

Of course, that means that several top 10 female Labrador names didn't rank so highly when it came to the 2015 puppies: Nos. 7 through 10 for Labs (Bailey, Abby, Lady and Shadow) were outside the top 10 on our popular puppy names list.

Daisy and Sadie, Nos. 3 and 4 on our most popular puppy names list, simply swapped spots with one another for our Labrador list.

And Now, the Gentlemen

There wasn't quite as big a difference between male Labs and the 2015 puppy list: Max, the No. 1 name for all male puppies, was No. 2 for Labs. The No. 1 name for Labradors, Buddy, was No. 4 on the most popular puppy names list.

The No. 2 puppy name, Charlie, was all the way down at No. 9 for Labradors. Other popular male puppy names that didn't make the Lab list were Jax, Zeus and Bentley.

Labrador Retriever names that failed to make the top 10 for the popular puppy names list this year were Jake, Jack and Sam.

Do you have a Labrador with one of the popular Labrador names mentioned above? Or, does your Lab have a name that's perfect, but less common? We want to hear about it in the comments!