Moving On Up: Wildlife Biologists Relocate Animals for Success 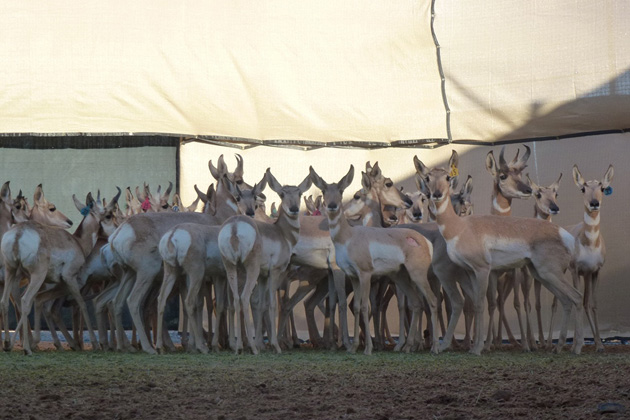 In the United States, an impressive variety of wildlife roams freely over almost 100 million acres of federally protected land, which is part of the National Wildlife Refuge System. The wildlife biologists who act as stewards of these areas deal with a lot in the course of their careers, but one of the most daunting tasks is the careful relocation of wild animals. Development, climate change, disease and similar factors can prompt the need for moving populations of wildlife. When that happens, these dedicated men and women must be up to the challenge of capturing and moving animals, while imposing the least amount of trauma possible.

The Road to Recovery

In Arizona’s Cabeza Prieta National Wildlife Refuge, Jim Atkinson has been working for more than five years on behalf of the endangered Sonoran pronghorn. The deerlike creatures have been protected under the U.S. Endangered Species Act since the late 1960s, and since 1998, the U.S. Fish and Wildlife Service has been working on a plan to help increase the animal’s population numbers.

Part of that effort, Atkinson says, involves moving pronghorn herds out of their currently established areas and into a larger habitat, which tracks more closely with where the animals historically would have lived.

“What happened is over time, with a variety of things associated with the development of Arizona — building interstate highways, canals, railroads, right-of-way fencing — that partitioned the landscape into areas that exclude [the pronghorn]. By doing assisted migration, we’re enabling them to get to a place they wouldn’t otherwise be able to get back to. The interstate highway has fencing on either side — that’s a formidable barrier to a pronghorn that they rarely, if ever, will attempt to cross.”

Across the country in Massachusetts’ Parker River National Wildlife Refuge, biologist Nancy Pau has her eye on recovery for a population of New England cottontail rabbits. And while these fluffy fellas might not have to contend with tall border fencing, over time, their habitat has also been broken down into smaller and smaller patches of viable terrain. “Careful study of these populations in the last decade found that the smaller groups were dying out,” Pau says. That led to the establishment of a captive breeding program, for which the cottontails had to be trapped and relocated. 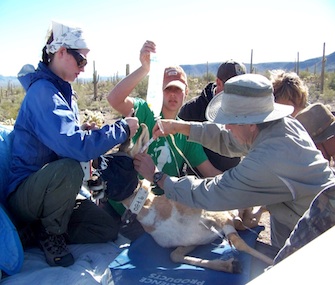 Credit: U.S. Fish and Wildlife Service
A team works to move a sedated Sonoran pronghorn from its corral trap to a helicopter before it is relocated to a new habitat.

For Atkinson and his team, it’s not as easy as herding the pronghorn into trailers and trucking them across the desert like so many cattle. Timing and temperature have to be right. “We typically trap in mid-December. We can only capture them when it’s below 65 degrees. Anything above that is bad for handling,” Atkinson says.

Pau also ensures the time of year is conducive to the animals' capture and makes certain any rabbits she’s targeting are healthy. “We are always cautious when trapping and handling animals because it causes them a lot of stress and can lead to death,” she says.