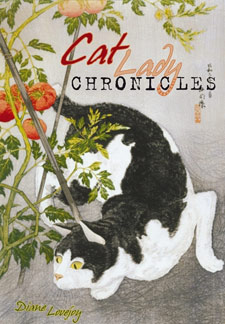 Diane Lovejoy has 10 cats. Although she’s married, and doesn’t wear a tattered bathrobe during the day, she is a bona-fide (and self-described) “cat lady.”

In her new book, Cat Lady Chronicles, the publications director for the Museum of Fine Arts, Houston, recounts how she went from being an art book editor to a woman who is just crazy for kitties.

And that's different from being a “crazy cat lady,” as Lovejoy likes to point out.

Vetstreet caught up with her to find out more about her family of felines — and what her husband really thinks about her obsession.

A. Diane Lovejoy: "I never dreamed that I would become a 'cat lady,' but then one day, in May 2000, I returned home from work to find an emaciated and wounded feline in our backyard. It appeared that he had been shot with a BB gun. I fell madly in love with the cat, who we named Lucius, and I must have heard that vintage song about 'one is the loneliest number' playing in my head. I could not stop at rescuing one cat, and aside from adopting one cat from a shelter, the other cats found me."

Q. Why do you think you're a cat person and not, say, a dog person?

A. "The calling to help creatures in need applies to both species, and it could well be that, in my next life, I will become a dog lady. For me, happenstance was destiny. Had I worked longer hours at the office on that fateful day in May 2000, I would not have met Lucius. But what I love about cats is their all-knowing silence, their laser-like focus, their no-hair-out-of-place grooming and their sweet dispositions — with the exception of Lucius, who is truly a (lovable) piece of work.

"Most people think of the 'cat lady' as the lonely, single, eccentric woman in the neighborhood with a million cats, and single women bemoan the term as a desperate future, as in 'I hope I don't end up as the cat lady.' Why do cat ladies get such a bad rap?

"As I was writing my book, I thought a great deal about the term and its unkind stereotypes. I even hesitated at first to put 'cat lady' in the title of the book precisely because it carries so much baggage. I can’t say I have conducted an exhaustive survey of why this historically bad rap exists, but I hope modestly that my book might give the naysayers pause so that cat ladies get the praise they deserve for being nurturing, compassionate and committed people. A lady who is 'crazy for cats' and a 'crazy cat lady' are two different animals.”