Home ›
Our Pet Experts ›
Mikkel Becker ›
My Dog Growls When She Greets Other Dogs. Should I Worry?

My Dog Growls When She Greets Other Dogs. Should I Worry? 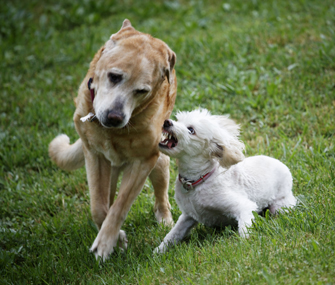 As part of an ongoing series, dog trainer Mikkel Becker teaches you how to address common behavior problems at the dog park.

Q. When another dog sniffs my dog's face at the dog park, she lifts her lip and growls. But once the other dog backs away, she’ll start playing with him soon after. She has never bitten any dog and she has never been in a fight. Is it OK to have a dog that sets limits like this?

A. It sounds like your dog is setting her boundaries right away with other pooches. She may be reacting with the lip snarl and growl either because she's nervous about another dog lingering in her face and doesn’t know a better way to convey this, or because she wants to set limits about her personal space from the beginning.

Dogs don’t use words to set their boundaries with other dogs; they communicate mainly through body language. It is critical that we allow our dogs to communicate with one another effectively. Problems often arise when we hinder our canines' communication by punishing them for perfectly normal dog behavior, like using warning signals to get other dogs to back off. Unfortunately, I’ve seen many well-meaning owners punish their dogs for snapping, growling or otherwise giving signals to other dogs to move away. These signals can come from perfectly well-socialized dogs, and are their way of saying that they need space.

Dogs use body language, such as lip snarls, to settle conflict without resorting to physical force. Humans use body signals in the same way. As a mother myself, I know that a simple eyebrow furrow from a parent can make an out-of-control child settle down without any physical — or verbal — intervention. In the same manner, your pooch is using her body language to communicate to other dogs that she needs her space, without using physical force.