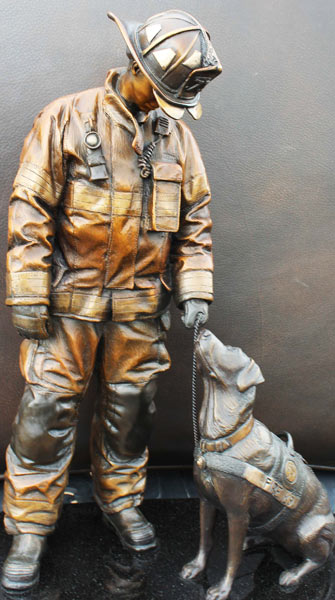 Every dog has his day, and on Thursday, arson dogs will get their due as they are recognized with a new monument in Washington, D.C. The bronze National Fire Dog Monument, which features a statue of a firefighter with his Labrador Retriever partner, comes home to the nation's capital after a tour that began in Denver.

Named “From Ashes to Answers,” the 450-pound monument was the idea of Colorado arson investigator Jerry Means and was sculpted by firefighter Austin Weishel. It will be placed in Washington’s Fire Station 3.

Arson dogs go through extensive training to be able to sniff out traces of accelerants that may have been used to start a blaze.

"The work that the dogs do really inspired me to create something where they can be recognized,” Means said of the seven-foot statue.

Means' own fire dog, Sadie, is the model for the sculpture. The 6-year-old working dog has been on 500 fires and won the 2011 American Humane Association Hero Dog Awards in the category of Law Enforcement/Arson Dog.

We are proud to see hero dogs like Sadie honored this way.