What’s cuter than a kitten pouncing? Not much, as you’ll find in Seth Casteel’s new book of photographs, POUNCE.

Casteel is known for his innovative photography and particularly his 2012bestselling book of photographs, Underwater Dogs, which caught the world’s attention as Casteel perfectly captured the playful, funny and endearing features of dogs in motion under water.

“I’ve wanted to do cats forever,” Casteel explains. “I just needed to figure out how, when and where.”

Casteel experimented with lots of cats who didn’t quite work out. “I’d show up at homes with adult cats whose parents thought they would be good subjects. The cats never even showed up!” he says with a laugh.

But Casteel understands cats, so he wasn’t put off. “I didn’t want to offend or annoy the cats,” he explains. So, he pondered other ways to make the cat book happen.

Then, it occurred to him: kittens. Rescue kittens. Doing what they do best: playing and pouncing. “Kittens in general are easygoing for this type of project,” he explains. “They’re playful, less fearful. They’re still clumsy and trying to figure it all out.”

Meet the Cute and Curious Kittens of "POUNCE" 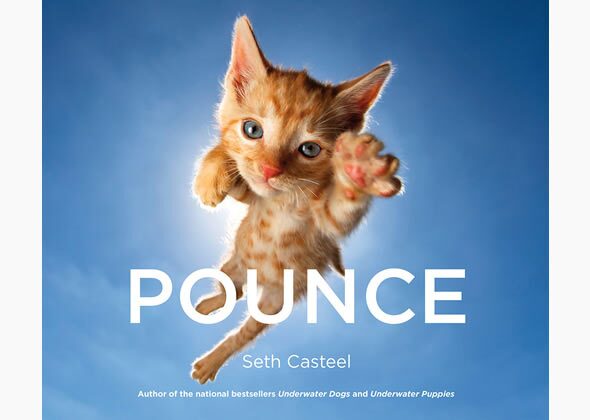 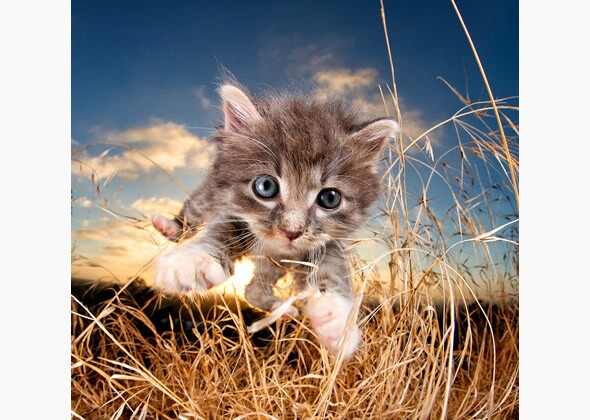 Bam Bam barrels through the field. 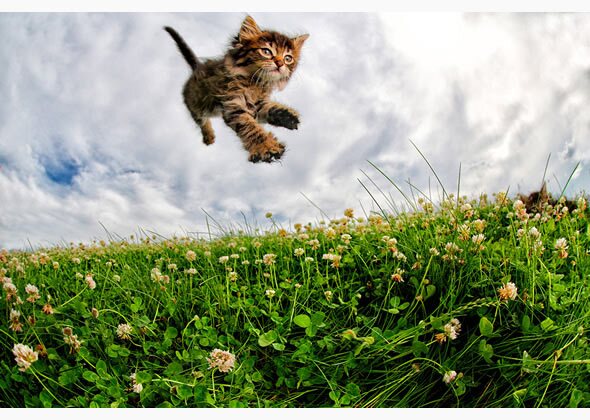 Gummibear gets gleeful in the clover. 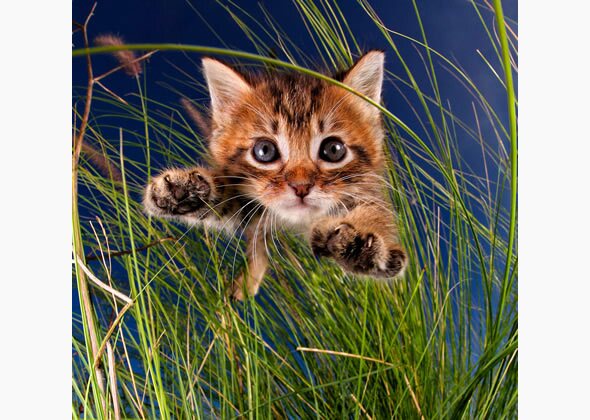 Bug-a Boo busts through the grass. 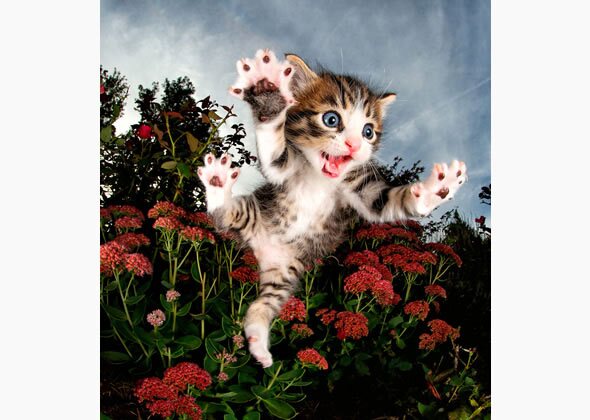 Chicken chases flowers. Or are they chasing him? Hard to tell, but it's cute nonetheless. 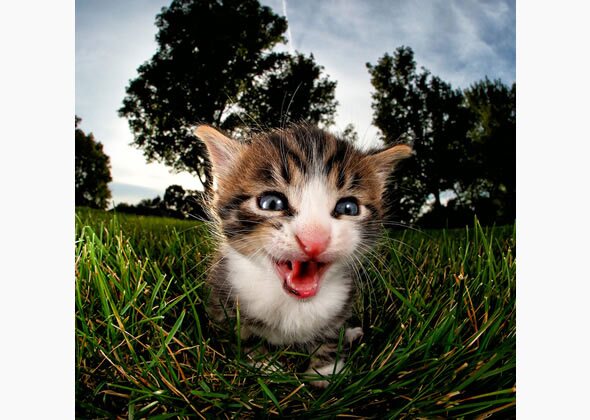 And that's not all! Check out Chicken scoping out the lawn. 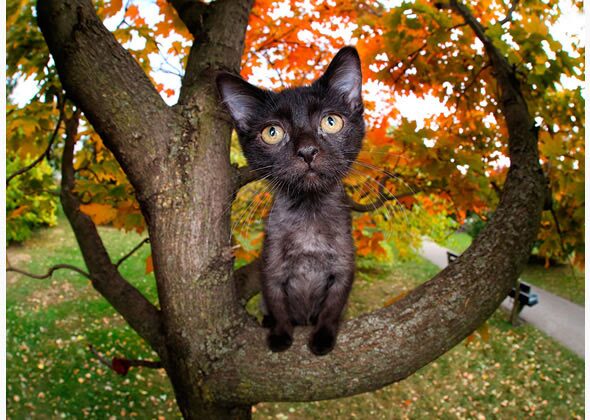 Petunia ponders life from a tree branch. Big thoughts for such a little kitten! 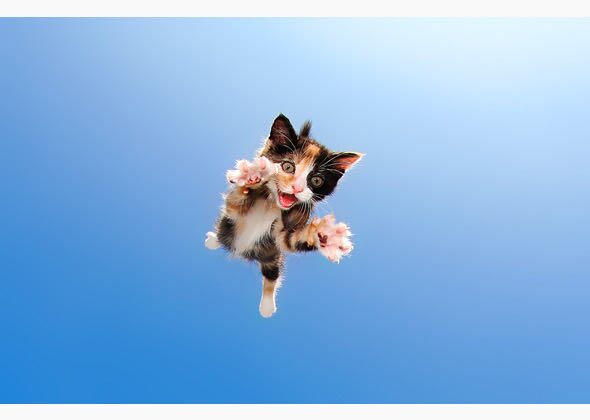 Zeppelin defies gravity. But what else would you really expect from a kitty with this name? 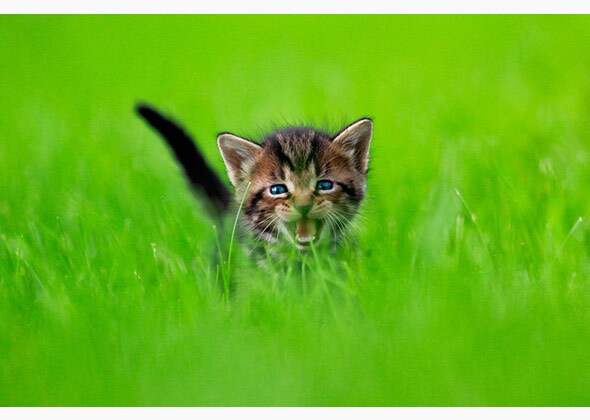 Dora explores a sea of green. 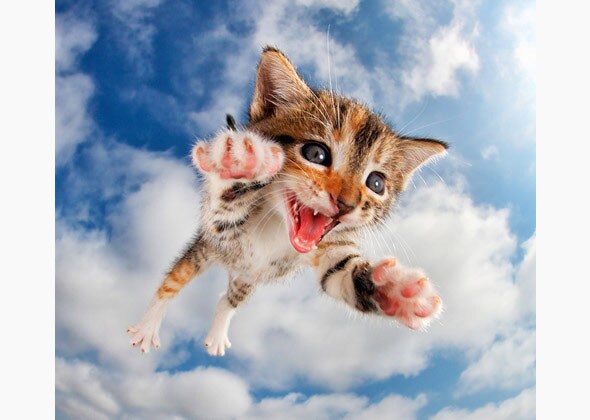 Fuzzbucket flies through the air. Those are some serious ups! 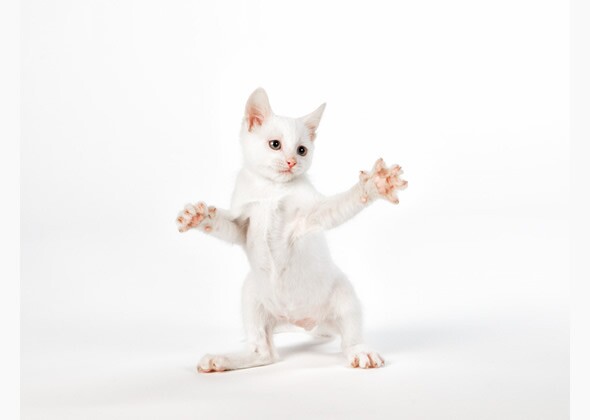 Jon Snow shows off his jazz hands. Dance on, Jon, dance on.

Still, even with perfectly playful and pouncing subjects, the creation of the book took hundreds of sessions to photograph the kittens. “You have to have lots of patience and lots of nap time,” Casteelsays. “One minute the kittens are playing and ready to pounce, and the next minute they’re asleep!”

Getting those photographs required some creativity in terms of the sets used, but there was one consideration that came even before the way a shot looked. "The safety of the kittens and cats in POUNCE was the No. 1 priority," Casteelsays. "The photos were taken utilizing multiple handlers and various types of enclosures to keep the kitties within our specific photo shoot area."

Eventually, Casteel finished the book, one that celebrates cats and, he says, offers important messages around animal rescue and the health and well-being of cats. In particular, Casteel urges, "Play with your cat!It’s good for your well-being and that of your cat.”

The popularity of Casteel’s work has catapulted him into a life and career he never imagined. After Underwater Dogs became a New York Times best-seller, Casteel went on to publish several more books including Underwater Puppies, Underwater Babiesand a series of children’s books.

Always an animal-welfare advocate, Casteel also launched a nonprofit program, One Picture Saves a Life, to help shelters and rescues across the country learn how to photograph their adoptable pets in compelling ways to increase adoptions.

Casteel’s popularity opened doors he’d never thought possible, which he never takes for granted. One minute he was a struggling pet photographer, and the next he had a bestselling book, worldwide fame and the opportunity to help pets in need on a large scale. “I’ve just tried to seize the moment,” he says. “I’m just smiling, you know?”