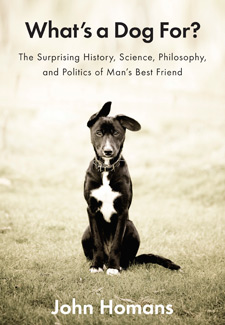 Author John Homans is a dog person. After adopting a shelter Lab mix, Homans anticipated that his relationship with the new pup, Stella, would be like the ones he had with the dogs of his childhood. But as Stella became a part of his family, Homans realized just how much the dog’s place in the world had shifted. Resolving to understand the changes in the world of man's best friend, Homans immersed himself in everything canine. He recounts what he learned in his new book What's aDog For?: The Surprising History, Science, Philosophy, and Politics of Man’s Best Friend.

His research took him far and wide; in the book, Homans details a 14,000-year-old grave discovered in Bonn-Oberkassel, Germany, which included a human couple and their family dog, and describes his trip to the grand estate in Scotland that is Stella’s ancestral home. He spoke with scores of dog experts at a conference in Vienna, including some involved in serious research about the dog’s ability to tune in to our nonverbal cues, like pointing, in ways our closest primate relatives do not.

Q. How did the book come about?

A. John Homans:"A friend of mine had a 10-year-old dog with blood in its stool and had taken it to an animal hospital on a Friday and had come out with a dead dog on Tuesday and a bill for $10,000. I realized, along with all the dog bakeries and dog coats and dogs sleeping in everyone’s bed, that it just seemed like something was happening. That was in 2009, so writing the book has been a big chunk of my life — a good three years. The reading was incredibly interesting, and the trips were fun. Who would’ve thought I’d manage to get to Vienna for a book about dogs?"