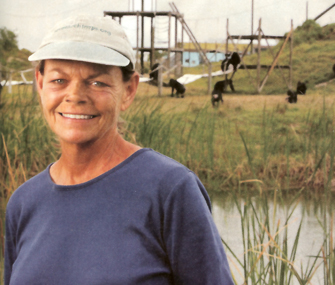 We spoke with Feuerstein about Ferguson's book and got an update on Terry and some of the other chimps in her care. Q. What was it about CaroleNoonthat allowed her to accomplish so much for chimps?

A. Dr. Carole Noon was one of the most hardworking, passionate and tenacious human beings I have ever met. When she set her mind on something, she put her heart and soul into achieving that goal. Fortunately for the chimps, she set her sights on providing chimpanzees in need with the professional care and dignified retirement they deserve. She inspired others to care as much for chimpanzees as she did and to use their talents — whether it was construction, fundraising or legal expertise — to help make Save the Chimps a reality.

Q. How is Terry doing now?

A. It's pretty incredible to see the progress he's made in such a short time — especially after 18 years without seeing another chimpanzee. The first month he was wary both of his caregivers and other chimps. His first introduction to another sweet guy named J.R. didn't go as we had hoped — Terry was very scared and rejected J.R.'s offers of friendship. But a female named Indie finally cracked his steely exterior. When Terry made it clear he did not want to interact with her, she basically said, "Fine. Have it your way!" and proceeded to do her own thing. Gradually, he became comfortable around her, and one day he let her groom him, and he groomed her. It was the breakthrough he needed.

Q. Some of the original chimpanzees rescued after their Air Force service are still living at Save the Chimps. Can you tell us about them?

A. Garfield was the youngest male, a mischievous teenager at the time, who came with the original Air Force group. Not all of the elder males in the group appreciated Garfield’s antics. He worshipped one older male, though — Marty. Marty was a kindly, mellow guy, and Garfield adored him. Garfield sometimes teased the other older chimps in the group, but never Marty. When Marty passed away, Garfield was by his side. Garfield learned a lot from Marty, I think, because he eventually stopped teasing other chimps and transformed into a leader. He knows how to be firm but kind. He's also a great dad to his daughter, Angie, and his son, J.B., who looks just like him! 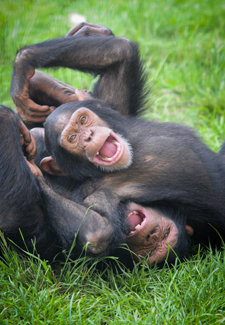 Photo courtesy of Save the Chimps
Jude and JB, two rescued monkeys playing together at the sanctuary.

Lil Mini, the youngest of the Air Force chimpanzees, was only 8 when she was rescued in 2001. Though grown up, she still has a goofy, fun-loving personality — doing somersaults just for the heck of it. It's impossible to know what is really going on in her head, but she seems to have a really positive outlook on life. She loves her island and spends hardly any time indoors.

Q. Which chimpanzee has gone through the most radical change since arriving at Save the Chimps?

A. It's hard to choose one, but Moesha has changed so much sometimes I hardly recognize her. When we rescued Moesha, she was thin, pale and had a very thin coat of hair. She would scream, rock and clutch blankets to herself for comfort. Even the lab she came from had placed her on an antidepressant. We introduced her to another female, Alari, and they became very good friends, but I honestly wondered if she would ever make it in a social group. She would get upset so easily, and you really have to be kind of tough to make it in a chimpanzee group.