New Book: Why 'The Thing With Feathers' Isn’t Just About Birds 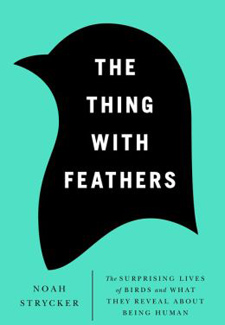 Have you ever considered the notion that humans could understand their behaviors better by studying the behaviors of other animals? This is just what Noah Strycker claims in his new book on birds, The Thing With Feathers: The Surprising Lives of Birds and What They Reveal About Being Human. In this 304-page hardcover book, Strycker looks at an eclectic mix of bird species, from pigeons and vultures to hummingbirds and albatrosses. With one bird species per chapter, the book provides dozens of interesting facts about each species’ activities and behavior. Even non-bird lovers should enjoy reading these fascinating facts, including that hummingbirds are the only birds that can fly backward or that vultures defecate on their legs to cool themselves off.

Although the author has taken painstaking efforts to ensure that all of his facts are correct — citing the work of hundreds of ornithologists who have studied these birds in great detail — the book’s focus is not just on providing entertaining trivia about birds. Rather, in describing the activities and behaviors of the various bird species, Strycker draws parallels between bird and human behavior. In drawing these parallels, the author hopes to provide the reader with insights about his or her own behavior and the behavior of other people.

For example, Strycker discusses how bowerbirds, large crow-like passerine birds native to Australia and New Guinea, are known for their elaborate courtship rituals in which males build a nest — the bower — and decorate it with sticks and brightly colored shiny objects they find in order to attract a mate. Males with more elaborate nests are generally more successful in mating and therefore are sexually selected for in evolution. The author likens this behavior to that of human males trying to attract women; men with a greater number of possessions and who are more creative are generally more successful in their attempts to find potential partners. Thus, human behavior mirrors the evolutionarily adapted behavior of birds. 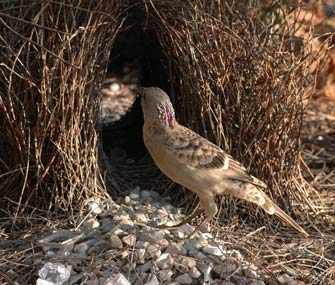 iStockphoto
Male bowerbirds are known for their elaborate nests, which are used to attract a mate.

The author draws another parallel between birds and humans in the chapter on fairy-wrens, brightly colored birds with pingpong ball-like bodies and pencil-like tails that are native to Australia. These birds are known for their cooperative nesting in which monogamous males and females raise nestlings that, once grown, do not fledge from the nest like the offspring of other bird species but instead hang around the nest to help their parents raise the next round of nestlings.

As the author describes, large families of birds, including hundreds of siblings, uncles, grandparents, cousins and a few unrelated individuals, join together into well-defined territories that resemble a row of tightly packed houses on a suburban street. By aiding each other in this way, fairy-wrens seem to practice altruistic behavior to help ensure that the next generation survives. However, birds that participate in these complex territories are more likely not only to pass on their own genes to the next generation but also to survive themselves. Thus, these birds may have underlying selfish reasons for behaving this way and may not be completely altruistic. The same can be said, claims the author, of acts of human altruism; most, he says, are motivated by some underlying selfish benefit.