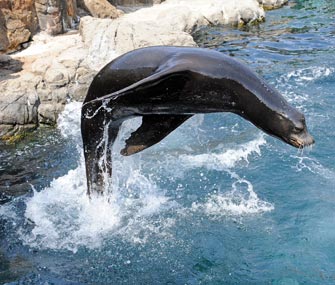 Julie Larsen Maher © WCS
The California sea lion will be back on exhibit when the New York Aquarium reopens later this spring.

After being closed for four months due to extensive damage from Superstorm Sandy, The Wildlife Conservation Society announced that the New York Aquarium would partially reopen later this spring.

“The New York Aquarium has been an important part of the economic, cultural, educational and scientific community of Brooklyn since 1957,” Cristián Samper, president and CEO of WCS, said in a statement. “We know all efforts to reopen the New York Aquarium are vital to the rebirth of Coney Island. This partial reopening will ensure that the aquarium can help all of New York City experience a strong comeback from the devastation caused by Hurricane Sandy.”

The reopening includes exhibits in the Main Hall, outdoor spaces of Sea Cliffs, Glover’s Reef and a fully remodeled Aquatheater, which will feature a new sea lion demonstration. Education programs will also resume on a limited basis, including theteen docent program, summer campfor students and training for educators.

The aquarium’s infrastructure was damaged when surge waters from the Atlantic Ocean flooded all buildings at the 14-acre park. It has been closed since the night of the storm.

“For more than 50 years, we have brought up-close experiences of the wonders of the world’s oceans to New York’s children and families. We are determined to ensure this important New York institution returns as strong as ever,” said Jon Forrest Dohlin, WCS vice president and director of the New York Aquarium.

Over the past few months, the WCS has worked with city officials as well as private donors to rebuild the damaged aquarium. The estimated budget for full restoration and reconstruction will be around $65 million.

In January, the Brooklyn Brewery hosted a “Brews at the NYAQ” event where all proceeds went to the Aquarium Recovery Fund.

“We really enjoy working with our local community organizations and have a strong community support program,” Kaitie Lynch, a Brewery representative, told Vetstreet in an email.

“[My daughters] knew right away where they wanted to help [after Sandy]. So my kids and my husband hopped in the car and drove out to Brooklyn to help with the cleanup effort,” Adams says. “When they came home that night, we realized we could reach a bigger audience to help the Aquarium if we worked through the store. So we launched our fund-raiser.”