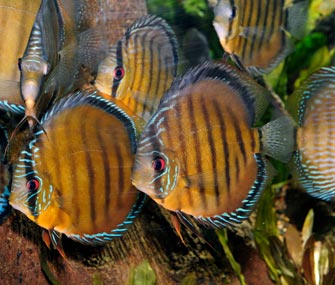 Julie Larsen Maher © WCS
Animals such as the discus fish (pictured above), black-footed penguins and queen angelfish will be back on exhibit when the aquarium reopens.

This was the biggest fund-raising effort Adams had ever undertaken, lasting four weeks in the store and ending with a “Save the New York Aquarium Festival.”

“In the end, we raised close to $1,000,” Adams says. “We were so excited to learn that they plan to reopen in the spring! We may be their first visitor!”

A Part of the Community

New York City officials, including Mayor Michael Bloomberg, also feel that the aquarium is a crucial part of Brooklyn.

“WCS’s New York Aquarium is important to the recovery of Coney Island. The partial reopening is a milestone for the community as it recovers from Hurricane Sandy,” Bloomberg said in the statement.

“The partial reopening this spring is a step in the right direction to restoring this iconic cultural and educational institution, but there is much more work that needs to be done before it is back up and running in full,” Recchia said.

Samper said the “WCS is proud to be a part of the comeback spirit” of New York.

"We will always be thankful to all the New Yorkers, our public officials, fellow aquariums and zoos, and our friends from around the world, who have provided us financial and emotional support during this very challenging time. This encouragement is helping us to work every day toward a fully reconstructed aquarium,” said Samper.

Get updates about the recovery and learn more about donating to reconstruction efforts by visiting New York Aquarium’s website and Facebook page.