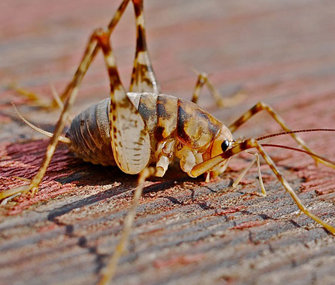 Photo courtesy of Camel Cricket Census
Camel crickets are known to jump without warning, making them a scary inhabitant of your home.

Imagine this: You head down to the basement to toss some towels in the dryer, only to find that you've been invaded by camel crickets. But crickets are cute, right? How bad can this be? Pretty bad.

"I first encountered them when I was in grad school in Maryland. Our basement was full of them," says Holly Menninger. "I have to admit, I wasn't a super fan — and I'm an entomologist." (That's a zoologist who focuses on insects, in case you were wondering. In other words, someone who shouldn't mind a basement full of bugs.)

But a camel cricket is leggy, spiky — and eerily silent. And leaps when you least expect it.

"You go down to do laundry and they jump at you," Menninger says. "And the biggest nuisance about them is that they pooped all over the place — we had a utility sink next to the washer, and it would just be full of it."

Fortunately, Menninger and her housemates figured out how to outwit the invaders: They left a light on all the time and put a bucket with a little water in the bottom underneath the light. The crickets would jump in and drown.

"I think we drove them insane," she says. "Now I have a little bit of remorse that we were so aggressive."

But she's making up for it these days. As director of public science for the Your Wild Life program at North Carolina State University, Menninger helps with the Camel Cricket Census, a citizen science project. If you're living with camel crickets, you can send in a photo and help researchers learn about the critters. Until now, very little scientific work has been done on these insects.

For the crickets, the basement is attractive because it's damp and dark, like the caves they're typically found living in. For most wildlife biologists, though, studying the crickets is not an appealing career path.

"People tend to think that if something lives around humans, that we must know all about it, but we don't," Menninger says. She adds, "The basement is not a sexy field site."

The basement may not be sexy, but it is informative. Right off the bat, the scientists learned one surprising thing: The photos people have sent in are nearly all of a non-native species, introduced from Asia. But that just raises more questions. They don't know if this is because non-native camel crickets are replacing the native ones or if something more complicated is going on. "It could be the native just prefers cave living, au naturel living, and doesn't care about houses," Menninger says.

In fact, they're not even sure of the most basic facts, like what the crickets live on. Since they live in caves in the wild, Menninger says they probably eat anything they can find — "detritus, dead stuff, fungus and mold. And other camel crickets — I've seen them eat their dead brethren."

It's likely that they consume other insects, too, and if you think there's nothing for them to eat in your basement, think again. Your Wild Life sent teams of entomologists into homes to find out what these critters were chowing on, and the results were... disturbing. "They spend three to four hours collecting every single arthropod that they can find. They poke around at the edges of your carpet. They're looking in the light fixtures and in your windowsills," Menninger says, "and we find on average about 100 species per house."

You probably don't want to believe it, but Menninger says they're there: "There's all kinds of stuff: There are carpet beetles, there are larvae that eat fingernail clippings and hair, all kinds of spiders, lots of flies. There is a lot living in your house that you might not see."