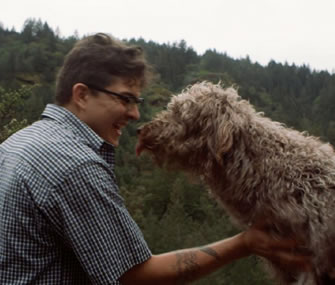 The famous Olate Dogs and their human, Nicholas Olate, star in “Dog’s Best Friend,” a new short film from Halo, Purely for Pets that highlights the importance of pet adoption.

And you get to see it first here on Vetstreet!

The beatnik-themed film is the second in a series from Halo, which is co-owned by Ellen DeGeneres. In it, Bella Olate plays Odysseus Dog, who rescues Alan, the human played by Nicholas Olate.

Odysseus is a stray dog living in the Pacific Northwest. He says he’s never wanted a human, but he’d noticed Alan a few times and he did seem “pretty cool.” So when the dog gets into trouble with a restaurant owner, he happily accepts a ride from Alan.

“I guess it’s true that, properly trained, a man can be a dog’s best friend,” Odysseus says in the film.

But Odysseus becomes separated from Alan while they’re out on the road and gets lost in the woods without a collar or microchip. (Don’t forget how important it is to have those things on your own best friend!)

The film then follows Odysseus’ journey to find Alan. We don’t want to spoil it, so make sure you check it out to see what happens to Odysseus and Alan.

Known for their amazing tricks, the Olate Dogs won America’s Got Talentin 2012. Many of the canine troupe’s performers are rescue dogs.

“Dog’s Best Friend” comes on the heels of “Le Sauvetage,” which debuted at the Sonoma International Film Festival in April. In fact, at the end of that weekend, the Olate family visited the local rescue Pets Lifeline, where they adopted a new dog named Max. He’s been a perfect addition to their family ... and their act.

“I got sodeep into the role that I hadto remind myself I was acting and no longerhomeless,” states Bella (the dog) in a press release. “It made me realize again how critical this [rescue] work is topets and humans, and how we must continue tospread the word about theimportance of adoption.”

The Olate Dogs have teamed up with Halo for the 2014-15 Rescue Tour, which includes appearances as well as two more short films to be released in the coming months.