Home ›
Our Pet Experts ›
Dr. Patty Khuly ›
Why I Can’t Stand the Hype Over Dwarf Cats

Why I Can’t Stand the Hype Over Dwarf Cats 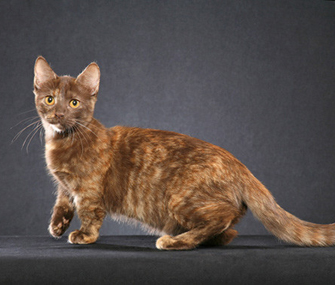 Would you ever want a cat who couldn’t jump on your countertops? Although it’s a great idea in theory — I mean, who wants cat hair in their food? — I think it’s an unsettling concept. A kitty who can’t do catlike things? Why would anyone want that? Let me explain. There’s this new cat breed called the Munchkin. Its claim to fame? Adorably short, stubby legs à la a Basset Hound.

How cute is that novelty act? Way cute — if the recent media attention that these cats have garnered is any measure.

In medical terms, however, we call this condition chondrodystrophism or dwarfism. It’s a heritable trait that stems from a single mutation. Unfortunately, it’s what most of us would consider a devastating disease, not a cute complement to a cat’s genetic repertoire.

Here’s some confirmation: According to the Free Medical Dictionary, chondrodystrophic dwarfism is “a congenital dwarfism in which the disturbed development of the cartilage of the long bones arrests the growth of long bones, resulting in extremely shortened extremities.” Indeed, the Munchkin isn't too different from similarly dwarfed dog breeds.

And consider Vetstreet’s own well-balanced description of the undeniably adorable breed of feline:

“The Munchkin is a cat breed that sprang from a natural genetic mutation. Reports of short-legged cats have appeared throughout history, including in 1944 in Britain, in 1956 in Russia, in 1970 in New England, and in the 1980s in Louisiana. A cat named Blackberry, who was found as a stray in 1983, was the mother of the Munchkin breed. She and one of her male kittens, Toulouse, were outcrossed to domestic cats. Outcrosses to domestic shorthairs and longhairs are still permitted to ensure a diverse gene pool.

"Starting in 1994, the International Cat Association’s new breed development program, which has a genetics committee to monitor breeding data, began to oversee the Munchkin’s development. The Munchkin’s short legs turned out to have a dominant inheritance pattern, similar to Corgis and Dachshunds. The breed achieved full recognition by the International Cat Association in 2003. The Cat Fanciers Association does not recognize the Munchkin.”

Why Dwarfism Isn't So Medically Adorable

For better or worse, dogs like Dachshunds and Corgis have a long, storied history of chondrodystrophism as a result of nonfunctional, dog fancier-propagated traits. Although it’s not widely discussed, the truth is that these breeds were bred for their lapdog styling, not for any particular function beyond the considerable cute factor.

Then there’s the health factor to consider: Most chondrodystrophics suffer inevitable issues related to their dwarfism. I’ve had four chondrodystrophic dogs in my life — rescued by virtue of their diseases — who've collectively required nine chondrodystrophy-related surgeries for problems like intervertebral disk disease and cruciate ligament disease.

Yet here we go again. Only this time, it’s all about cats.

It's one thing to accept dog breeds that we’ve grown to love and whose history we’ve come to regard as a reasonable defense for their challenged health, but it’s quite another to repeat the mistakes of the past.