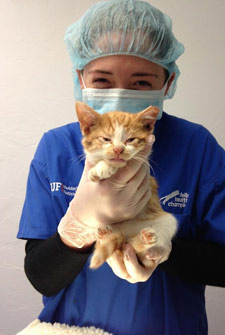 More and more communities throughout the country have begun to understand the important role trap-neuter-return (TNR) plays in caring for and controlling feral cat populations, but often, they've run into the same hurdle: an inability to do the surgeries on a large scale.

That's all about to change.

Operation Catnip, a TNR program in Gainesville, Florida, was founded in 1998 by Dr. Julie Levy, director of the Maddie's Shelter Medicine Program at the University of Florida College of Veterinary Medicine. The organization has cared for more than 45,000 felines in its free, high-quality, high-volume spay/neuter clinics for community cats. And that doesn't include the projected number of prevented births of kittens over those 16 years. In 2014 alone, Operation Catnip examined, spayed or neutered and treated nearly 2,700 cats, preventing an estimated 6,142 homeless kittens from being born in the area.

And now the methods used by Operation Catnip will be shared — in detail — with veterinarians nationwide, thanks to an educational grant from PetSmart Charities.

From Handling Cats to Handling a Large-Scale Operation

The PetSmart grant will enable communities everywhere to follow Operation Catnip's successful lead, from teaching handling techniques to offering suggestions about how to set up for the surgeries and more. Operation Catnip's success lies partly in the recognition that feral cats are different from domesticated cats. "There are some unique needs when it comes to feral cats in clinics, both for the safety of the people and the cats,” says Dr. Levy. Even in communities where the actual surgical needs were able to be met, she still saw that the veterinarians and professionals involved needed training in handling feral cats, which is dramatically different from handling a typical house cat, including managing the cats' stress and fear. 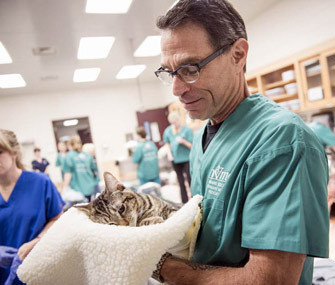 Credit: Operation Catnip
Operation Catnip trains its volunteers to do one task all day long, and then efficiently moves the cats through the stations.

The Operation Catnip team is also prepared to instruct shelters in the practical side of running a TNR program. "When we started Operation Catnip in 1998," says Dr. Levy, "we wrote a manual with step-by-step instructions." Because the operation functions with a volunteer workforce doing a lot of work at a high skill level, these instructions were crucial to its success. "We train people to do one task all day long, and we move the cats along through the stations,” she says, allowing each cat to be examined, spayed or neutered, vaccinated against infectious diseases, treated for fleas and other parasites, given an identifying ear tip and allowed to recover before being returned to the location where he or she was trapped.

And if you're thinking that sounds a bit like a M.A.S.H. unit, you're right on-target.