Our 6 Favorite Animal Rescue Stories of 2016

In August, passengers and crew on board an Island Queen ferry headed to Martha’s Vineyard,Massachusetts, from Cape Cod were surprised to spot a Spaniel about a mile offshore. The ferry started to circle the dog, and two Coast Guard officers on board attempted to rescue her — but the dog was scared by the size of the 125-foot vessel and kept swimming away from it, the company said in a Facebook post. So the captain sounded the horn five times as a danger signal, and a recreational boater arrived on the scene to help. The ferry passengers and crew cheered as the boaters pulled the dog on board. It turned out that the dog, Chesney, had fallen off of another passing ferry, and her family was alerting the captain at the time that she was located. Luckily, she was reunited with her relieved family later that day. — Read it at the Cape Cod Times 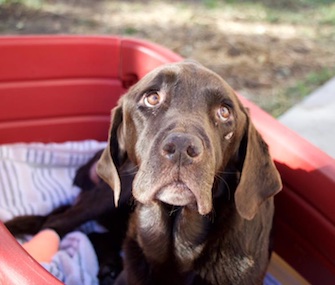 Jill Desautels / Bruno's Road to Recovery
Bruno the chocolate Lab is recovering after being trapped in a well for 27 days.

Bruno, a 7-year-old chocolate Labrador Retriever, was missing for nearly four weeks when his family discovered him trapped at the bottom of a 10-foot well — thanks to one of his family’s two other dogs. They were out for a walk near their Saskatchewan, Canada, home in October when Esme, who’s also a Lab, stopped and refused to move. As it turned out, she was showing them the spot where Bruno had fallen into the well. Bruno’s owners, John and Cindy Billesberger, got the emaciated dog out of his predicament and rushed him to the vet. After a month of treatment at the veterinary hospital for dehydration and deep rashes, Bruno finally got to go home in November. From the updates on Bruno’s Facebook page, it looks like he’s still getting used to being part of the pack again, and he’s enjoying lots of snuggles and TLC from his people. — Read it at the Huffington Post

Leopard, a 6-year-old Shar-Pei mix, was out for a walk with a volunteer at the Cuyahoga County Animal Shelter in Ohio in November when she suddenly stopped in front of a sewer grate and wouldn’t budge. The volunteer listened closely and heard the faint sound of a kitten’s cries coming from below. The volunteer called for help, and deputies and other shelter volunteers saved the kitten from the drain. The kitten has been adopted and is staying at the home of a shelter volunteer. And now Leopard has her own happy ending. A longtimer at the shelter, the hero dog was adopted on Dec. 2, just in time to spend the holidays in the loving home she deserves. “She came in the house and sniffed over everything and then did a playful little dance,” her new ownerreports. “So cute and such a sweetie pie.” — Read it at Ohio’s Fox 6 Now