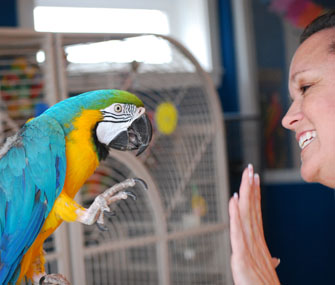 In many ways, a parrot is an ideal pet. Parrots are intelligent and social, and they frequently outlive other domesticated animals. But those same traits can also make it complicated to meet their needs and can often cause owners to give them up to rescue groups.

Finding a new home for a parrot isn't as simple as you might imagine. Rehoming a parrot is an individualized process that requires time and effort — and some very specialized knowledge.

Sheila Blanchette was inspired to start a foster program for birds at the Massachusetts Society for the Prevention of Cruelty to Animals (MSPCA) at Nevins Farm in Methuen, Mass., when she met Charlie, a Quaker parrot. He’d plucked out all his feathers, something birds do when they’re stressed and neglected. “He wasn’t a happy guy with people,” she recalls. “He wasn’t going to do well in the shelter — he was going to keep doing what he was doing.”

Blanchette took him home where she could give him individual attention and figure out what made him tick. “We started slow and watched what he did,” she says. “When we got near the cage, did he yell at us, did he attack us? What food did he like? What drove him?”

She and her husband spent between two and five hours each day providing Charlie with enrichment and interaction. “Some days less when we could tell he wasn’t in the mood — maybe just a hand on the cage,” she says.

Blanchette offered Charlie a wide variety of foods and watched what he picked out of his bowl. Discovering that sunflower seeds were his favorite gave her a way to start working with him. She also provided different toys and discovered that he loved anything he could shred, even just a ball of tissues. “He thought that was just fantastic, and we noticed the plucking started to stop,” she says.

After almost nine months, Charlie started to ask for attention from her husband, and the Blanchettes decided it was time for him to find an adoptive home.

Not all parrots take nine months of rehab, but all need individual attention — and that has to be multiplied by the increasing number of parrots being surrendered to shelters. In 2008, MSPCA took in 11 parrots; by 2013 that number had more than tripled, to 37. But what really complicates the situation is that given their long lifespans, even parrots with terrific owners are probably going to need a new home eventually. Ann Brooks, of the Phoenix Landing Foundation, says that they don’t even like to use the word “rescue” and discourage the idea of a “forever home” for a parrot.

“Birds live so long compared to other pets that it’s inevitable that they’re going to need several homes,” she says. “We try to make sure birds have a succession of good homes.”